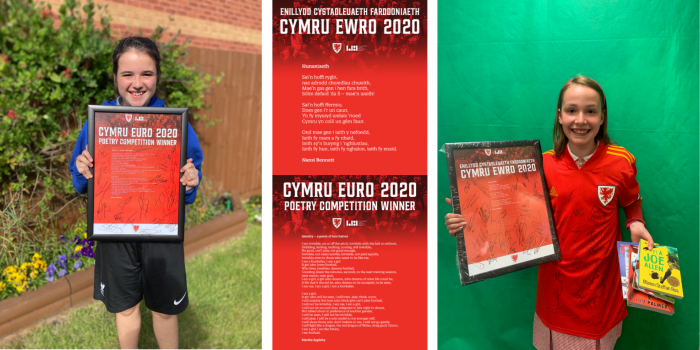 Winners of the Cymru Euro 2020 Poetry Competition announced, in celebration of Cymru qualifying for the Euro 2020 finals.

In celebration of Cymru qualifying for their first consecutive Euro finals tournament, the Football Association of Wales and Literature Wales joined to launch an exclusive Cymru Euro 2020 Poetry Competition back in April 2021. The competition invited the children of Wales to submit poems on the theme of identity for a chance to win a host of fantastic prizes.

The competition attracted 495 entries in total, and the Football Association of Wales and Literature Wales are thrilled to announce that the two winning poets are Nansi Bennett and Martha Appleby. The news was also announced on BBC Radio Wales this morning. 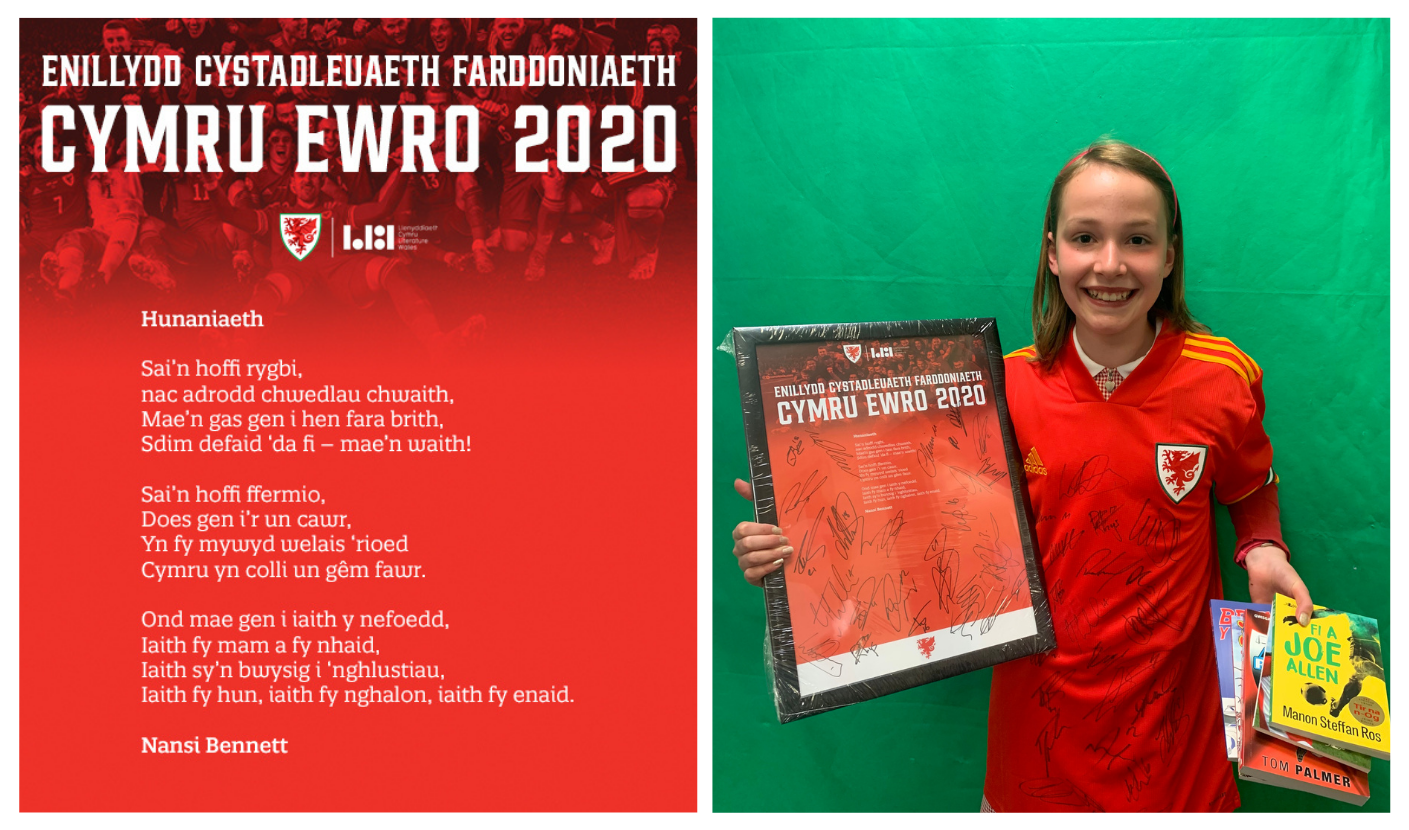 “I wasn’t familiar with the word ‘identity’ when I first learned of this competition, but we had a discussion in class about the things that were important to us as individuals. The thing that stood out for me was my language and my family. I’m best of friends with my mam and my taid so it was natural for the poem to mention them. I’m so happy that I’ve won and can’t wait to frame the shirt and put it up on the kitchen wall! Thank you to the judges for selecting my poem.” 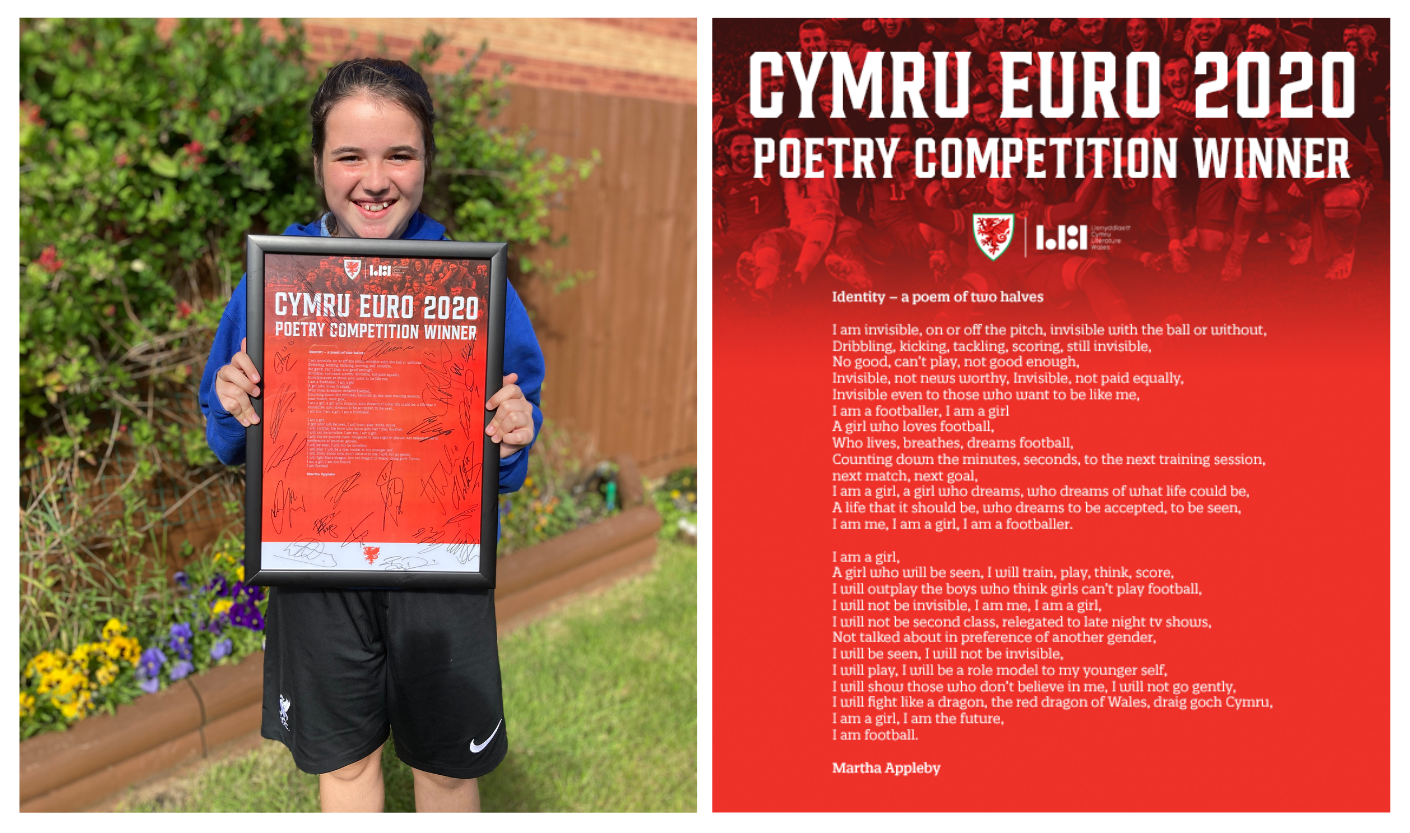 Martha Appleby, the English-language winner, is 11 years old and a pupil at Pontarddulais Primary School. Reacting to the news, Martha said:

“I am absolutely thrilled to have won. The poem is about me and my own football experience. When I started playing football there was a lot of resistance in my school yard and boys would tell me I couldn’t join in and I had to play on my own. Now I play for Pontarddulais, in both the girls and mixed teams, and the club is growing in numbers, especially with girls.

I love football but there is still this idea by many that it is a sport for boys and that girls can’t play. My poem reflects how I feel and how important I think it is for girls to have good role models that are seen and valued and recognised for their sporting achievements rather than their gender. I hope other girls like me, who love playing football, will identify with me and with my poem. We are the future of football and it is us to speak up and make a change.”

Both Nansi and Martha receive a signed Cymru football shirt, a signed framed print of their poem, a book bundle, and a workshop for their school class by Eloise Williams, Children’s Laureate Wales or Gruffudd Owen, Bardd Plant Cymru.

Gruffudd Owen, Bardd Plant Cymru, said: “It was an absolute pleasure to read all the excellent poems by Wales’ young poets. We received short poems, longer poems; simple poems and complex poems; and each one explored the theme of Identity in its own unique way. Congratulations to Nansi and Martha, and diolch to every poet who sent us a poem – keep writing!”

The competition was open to primary-aged children, and poems could be submitted in Welsh or English. Children were encouraged to be original, to write from the heart, to interpret the theme of Identity in any way they wish, and to remember that their poems did not have to be about football.

The competition is a continuation of the partnership between the Football Association of Wales and Literature Wales which last year saw the organisations working with pupils from Ysgol Gymraeg Bro Teyrnon in Newport to compose an inspirational Welsh-language poem for the launch of Wales’ UEFA Women’s Euro 2021 qualifying campaign.

Cymru player, Ben Davies said: “Being a part of the judging panel alongside my Cymru teammate, Rhys Norrington-Davies, was a lot more difficult than we expected due to the high number of fantastic poems that were received. It was a joy to read through the entries and see the amount of young talented poets we have across the nation!”