A poem for the Wales football Squad 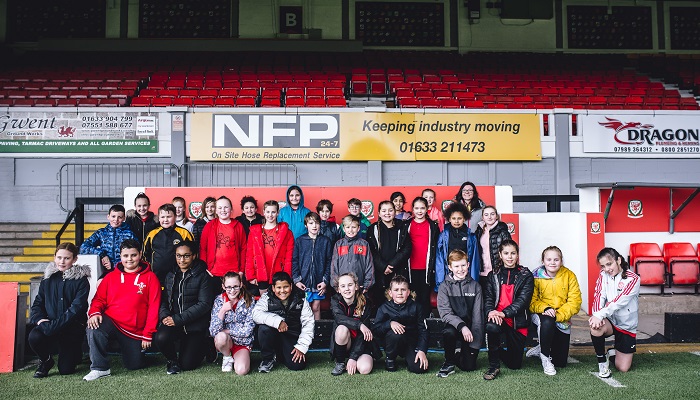 The inspirational Welsh-language poem, written by Year 6 pupils from Ysgol Gymraeg Bro Teyrnon in Newport, is the result of an exciting partnership between the two organisations, formed through the Bardd Plant Cymru scheme.

The Bardd Plant Cymru scheme is run by Literature Wales with the support of Welsh Government, S4C, Books Council of Wales and Urdd Gobaith Cymru. Through workshops, performances and activities the scheme introduces literature to children in an energetic, dynamic and fun way. Through working in partnership, FAW and Literature Wales have been able to introduce both creative writing and football to children in a unique way.

As part of the project, thirty schoolchildren aged 10-11 joined the Wales squad at an open training session and press conference held at Rodney Parade ahead of Wales’ friendly fixture against Czech Republic in April. The schoolchildren also had the opportunity to meet with the players before partaking in their own football training session led by FAW Trust coaches.

Following a day which increased the children’s appreciation and interest in the Welsh squad, Ysgol Gymraeg Bro Teyrnon pupils joined Bardd Plant Cymru, Casia Wiliam at Dragon Park to engage in a poetry workshop, which created ‘Cymru ar Ben y Byd’, a poem on the nerve wracking and exhilarating experience of a Wales match.

Here’s a video about the partnership between Literature Wales and the FAW:

“It’s fantastic to work in partnership with FAW to inspire the children of Wales. Literature Wales, the FAW, and the FAW Trust are committed to engaging with children and young people to increase participation in and enjoyment of literature and football respectively, and to support and advocate the various ways literature and sport can contribute positively to the nation’s health and well-being.”

“Seeing the film play in front of a full Rodney Parade in September is something the children can be proud of for years to come and is an experience to treasure.”

“I feel very proud because I love my country and football is one of my favourite sports. I really hope we’ve made a great poem for the team that will represent them.”

On the Welsh language used throughout the Bardd Plant Cymru project, Ian Gwyn Hughes, Head of Public Affairs at the FAW added,

”It shows that Welsh is a living and modern language that’s not just for the classroom. We look forward to working together with Literature Wales on future projects to offer exciting and varied experiences to youngsters across Wales, especially in connecting with hard-to-reach individuals and communities”.