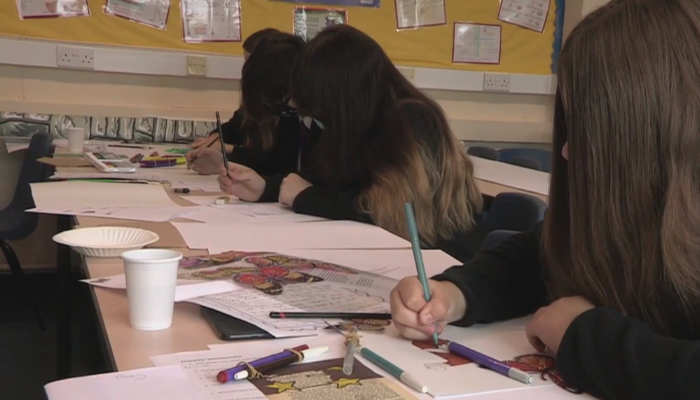 Literature Wales is delighted to share a new film, created with pupils from Cwmbran High School as part of our Llên Pawb | Lit Reach project in Torfaen.

Filmmaker Tracy Pallant said: “The young women had so many imaginative ideas as to how to illustrate their poems and creative writing on film. They made a great film together.”

Poet Jodie Bond said: “I was delighted to be offered the opportunity to work with pupils at Cwmbran High School. I was wholeheartedly inspired by the creativity of the pupils. Over three sessions we worked together to craft poetry on the theme of Wales. We explored all aspects of life here, from the pride of sporting events, to our history, to everyday shopping trips. We designed a new animal for the flag of Wales and the pupils produced some beautiful illustrations to accompany their writing. Our sessions involved found poems, storytelling and prose writing. It’s a wonderful feeling to witness children producing such astounding work and recognising their own achievements. I left every session beaming.”

Huw Watkins from Inspire said: “The young people loved the workshops and produced some very creative, high quality and individualistic pieces of work. It was a pleasure to see them grow in confidence as the weeks progressed. The tutors were brilliant and brought the very best out of the young people, giving them the support and skills needed to flourish. I think the young people should feel very proud of themselves.”

One of the young people who took part in these sessions said: “I enjoyed the sessions. My favourite parts were creating the Welsh poems and having the experience of filming. I definitely feel more comfortable speaking in front of people. It was nice to do something different and the tutors were lovely.”