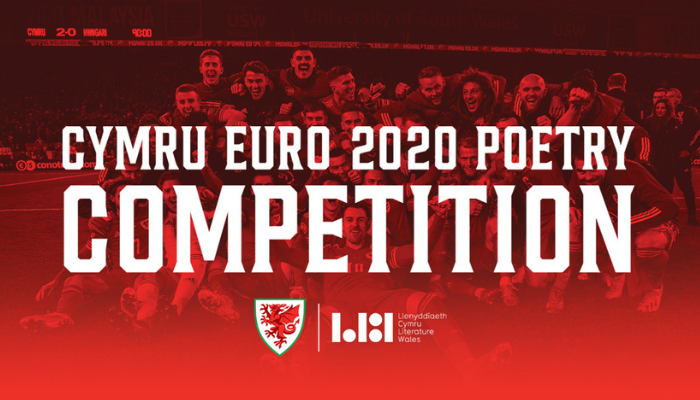 Exclusive Poetry Competition for primary-aged children launched in celebration of Cymru qualifying for the Euro 2020 finals.

In celebration of Cymru qualifying for their first consecutive Euro finals tournament, the Football Association of Wales and Literature Wales have joined to launch an exclusive Cymru Euro 2020 Poetry Competition.

The competition invites the children of Wales to submit poems on the theme of identity for a chance to win a host of fantastic prizes.

To commemorate the launch of this competition, Cymru Player Connor Roberts has recited poems written by Bardd Plant Cymru, Gruffudd Owen on his interpretation of the theme of identity. Watch the video here.

Eloise Williams said: “What a wonderful opportunity for the children of Wales to challenge themselves and display their creativity. Poetry is such a brilliant way of discovering ourselves and using our unique voices. I am so looking forward to reading what they have to say about identity. I just know there will be a wealth of talent and individuality in those words. Young people’s voices and opinions are magical. I can’t wait to celebrate them!“

Winners in both Welsh and English will receive a Cymru football shirt, a framed version of their poem both signed by the Euro 2020 squad, a book bundle and a workshop for their school class by Eloise or Gruffudd. The winning poems will also be presented to the Wales players ahead of their opening Euro 2020 match.

Gruffudd Owen, who entered his Chair-winning poem to the 2018 National Eisteddfod under the pseudonym Hal Robson-Kanu after being inspired by the Cymru player’s performances in the UEFA Euro 2016 finals, said:

“Anyone can write poetry – there are no rules. I just want children to feel inspired to have a go and to have fun, that’s what it’s all about for me.”

Children are encouraged to be original, to write from the heart, to interpret the theme of Identity in any way they wish, and to remember that their poems do not have to be about football.

Kizzy Crawford, who has performed at events with the Football Association of Wales, like the party celebrating Wales’ success in the Euro 2016 competition at Cardiff City Stadium, said: “Ever since I can remember, I have used words and music to explore and challenge my own identity. As a Welsh, mixed race artist, I’m extremely excited to be part of this competition which will encourage children to explore what identity means to them.”

The competition will be launched on BBC Radio Wales and BBC Radio Cymru with both stations supporting the exciting competition as it unfolds.

The competition is a continuation of the partnership between the Football Association of Wales and Literature Wales which saw the organisations working with pupils from Ysgol Gymraeg Bro Teyrnon in Newport to compose an inspirational Welsh-language poem for the launch of Wales’ UEFA Women’s Euro 2021 qualifying campaign.

Cymru National Men’s Captain, Gareth Bale, said: “It’s fantastic that our qualification for UEFA Euro 2020 will not only encourage and inspire children to express themselves on the pitch, but also through their poetry writing. I’m looking forward to reading the entries!”

Poems must be submitted on behalf of children by a teacher, parent or guardian. The deadline for entries is Thursday 20 May 2021.

For further information, including how to submit poems, visit: www.literaturewales.org/euro2020