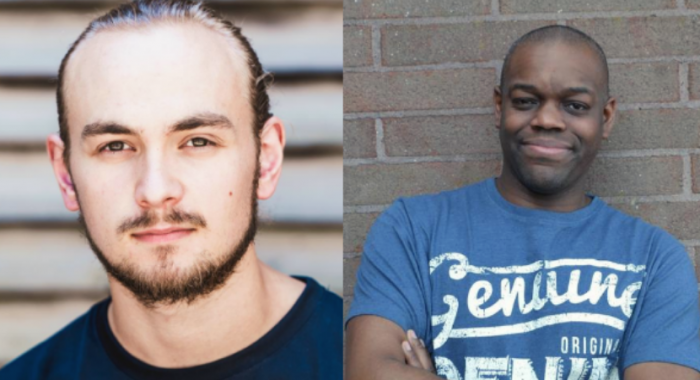 On Sunday 23 August, in respect of International Day for the Remembrance of the Slave Trade and its Abolition, Literature Wales and National Dance Company Wales (NDCWales) announced its next short film release from their poet and dancer project, Plethu/Weave, which focuses on Wales’ involvement in the transatlantic slave trade.

The International Day for the Remembrance of the Slave Trade and its Abolition, started by UNESCO, is now held annually across the world on Sunday 23 August, which offers an opportunity for collective consideration of the historical consequences of slavery.

Wales-based Black poet Marvin Thompson, and NDCWales dancer, Ed Myhill who is of White British heritage – as part of NDCWales & Literature Wales’ new innovative cross-art form digital collaboration project, Plethu/Weave – will look at Wales’ involvement in the transatlantic slave trade. Triptych, released on Thursday 3 September, weaves Marvin’s words together with a new soundscape and movement by dancer Ed Myhill to convey the injustice, the communities and the people affected in a powerful poetic letter.

“Ed Myhill and myself have created a film inspired by my poem ‘Triptych.’ This poem is a response to a plaque in Brecon that commemorated a slave trader. Ed Myhill took the first section of ‘Triptych,’ an open message to Brecon Town Council, and remixed it over a soundscape that he composed. The film incorporates images of cornfields, the sea and the movement of our bodies to amplify themes of ecological destruction and enslavement.”

Triptych is the third video of eight from the Plethu/Weave project by NDCWales and Literature Wales. The new digital film project sees dancers from NDCWales and the independent sector, partnered with some of Literature Wales’ commissioned poets to create eight short solo film performances during lockdown.

The first two films, Hirddydd by Mererid Hopwood & Tim Volleman and Ust by Ifor Ap Glyn & Faye Tan premiered as part of the National Eisteddfod’s Gŵyl AmGen at the beginning of August and are now available to view on NDCWales / Literature Wales’ websites and social media channels.

“Literature and the arts can guide us towards a better understanding of difficult and important issues. Through poetry and dance, Marvin Thompson and Ed Myhill openly and honestly examine Wales’ involvement in the trans-Atlantic slave trade, and Literature Wales is very proud to support this work in partnership with NDCWales. The Day for the Remembrance of the Slave Trade and its Abolition is an occasion where everyone around the world – including the citizens of Wales – should pause to reflect the atrocities of the past.”

“Dance is an artform which relies on deep collaborations – with choreographers, composers, designers and often with writers. Two Wales-based artists – a poet and a dancer – are collaborating to make a work for and about Wales, reminding us of our past in the trans-Atlantic slave trade and challenging us to reflect on how Black Lives Matter, then and now. The power of the work they have made is a testament to them as artists, and the relevance of their subject”

Triptych will be broadcast on NDCWales and Literature Wales’ social media channels from Thursday 3 September and will be available to watch for up to 12 months. The next five new short films from Plethu/Weave will be broadcast every fortnight online as part of KiN:Connected, NDCWales’ digital programme.

Marvin Thompson was born in Tottenham, London to Jamaican parents and now lives in mountainous south Wales. His debut collection, Road Trip (Peepal Tree Press, 2020), is a Poetry Book Society Recommendation. In June 2020, the Poetry Society selected Road Trip as one of five Black Lives Matter Inspiration books. In addition, Road Trip is one of 40 collections and anthologies recommended for National Poetry Day, 2020.

In 2019, Thompson was one of only eight writers to be awarded a grant by Literature Wales as part of the Platforming Under-Represented Writers Funding Scheme. He was also shortlisted for the 2019 Manchester Poetry Prize.

In 2016, Thompson was selected by Nine Arches Press for the Primers 2 mentoring scheme. In addition, he has an MA in creative writing.

Ed Myhill
Originally from London, Ed grew up in Leeds and trained at Hammond Secondary School in Chester, followed by three years at Rambert School of Ballet and Contemporary Dance. He joined NDCWales as an apprentice in Autumn 2015 and is now a full time dancer with the Company. Ed has toured extensively across the UK and abroad including works from Alexander Ekman, Roy Assaf and Marcos Morau.

You can view Marvin and Ed’s short film, Triptych, below: