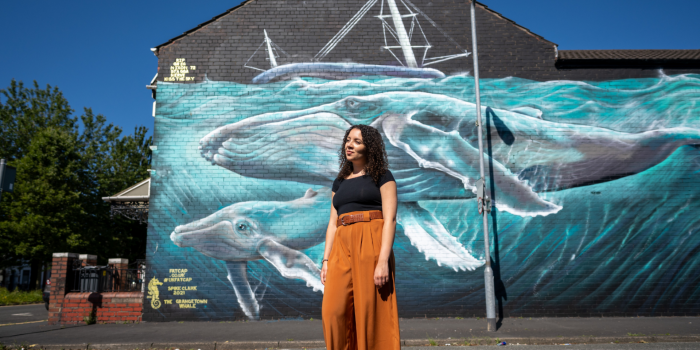 Taylor Edmonds, the Future Generations Commissioner’s Poet in Residence, has written a powerful new poem, Reconsidering Future, that imagines a Wales in the future where ‘everyone is paid enough to truly live’, in support of a full UBI pilot.

A universal basic income (UBI) is an unconditional payment where a government pays every individual a set salary, regardless of their means. Payments are made automatically, without procedures like queuing and regular form-filling. Earlier this year, following a Wales-wide movement, Mr Drakeford announced he would pilot a basic income. Welsh Government later said it was interested in developing a small pilot, potentially involving people leaving care.

According to the World Health Organisation, poverty is the single largest determinant of health, and ill health is an obstacle to social and economic development. This means poorer people live shorter lives and have poorer health than affluent people. In June, a new report by Public Health Wales said introducing a basic income could mean better health and well-being for everyone in Wales.

Wales’ Well-being of Future Generations Act requires Welsh Government to use joined-up thinking to develop long-term solutions and prevent problems. A poll on behalf of the Future Generations Commissioner found that 69% of people in Wales think we should trial a basic income and 25 Members of the Senedd have signed UBI Lab Wales’ Pledge for UBI.

Sophie Howe, the Future Generations Commissioner, said furlough ending this September along with an end to the Universal Credit pandemic top-up of £20 a week were yet more signs that the current systems of welfare and work aren’t fit for purpose. Ms Howe wants MSs to talk to people in their communities this summer about how a basic income could better support them long-term and for Mr Drakeford to implement a geographically-based UBI pilot as part of his new programme for government. In her Fit for the Future Programme for Government, the commissioner calls for the pilot to include participants split across two specific communities, in one urban and one rural region of Wales.

She said: “It’s time to accept the system is broken and without a stronger safety net, generations to come will be left with a legacy of deprivation.

“UBI could protect not just those hit hard by Covid but every one of us from other shocks to come – like the climate emergency that’s going to cause more devastation via extreme weather like heatwaves and floods.

“Keeping people well means doing new things to tackle poverty, and Welsh Government has to take this chance now to use the Well-being of Future Generations Act to properly test how a UBI can change lives.”

A poem, by Taylor Edmonds, the Poet in Residence for the Future Generations Commissioner for Wales….

In this version, your mother doesn’t take a second job,

no 50-hour week and empty seat at the table.

Without the weight of night shifts on her back

she goes to college, starts to dream

of soil-stained hands, a community garden,

of reading stories to the sleepy rhythm of your breath.

His body lighter, he starts to paint, fills the walls

with hues of watercolour. The haunting

never come through the letterbox.

His children know only how to be children,

full-bellied, planning a trip to space,

to build a secret den in the treetops.

What kind of home is Wales

when a third of young people are living in poverty?

while our toes are curled at the brink.

homelessness, the long wait for welfare

We may fail and stumble,

but imagine a country

where everyone is paid enough to truly live.

Without the fear of losing it all,

who could you become?

with purpose, defined by more

than a job title, possessions, productivity.

When we own our bodies,

I want you to just lay here in the grass

Taylor Edmonds,
Poet in Residence for the Future Generations Commissioner for Wales