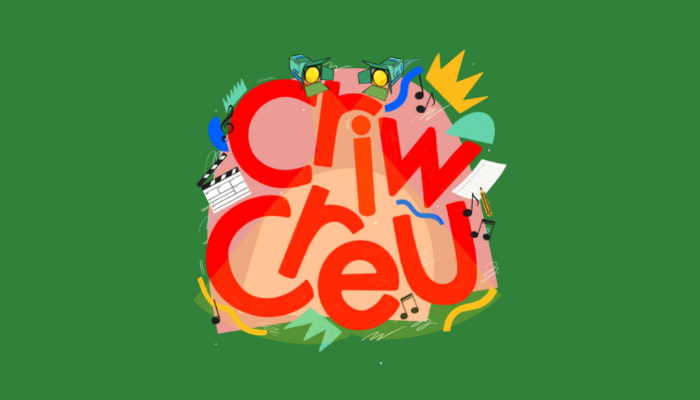 Criw Creu is a brand-new project led by Theatr Genedlaethol Cymru with support from Literature Wales and Urdd Gobaith Cymru. This important project aims to ensure that young people have the opportunity to access the Arts, through the creation of original work under the leadership of experienced and inspirational artists.

Criw Creu was developed following a pilot supported by Western Power Distribution and Arts and Business Cymru back in June 2021. During the project, which was led by Theatr Genedlaethol Cymru, artist Siôn Tomos Owen collaborated with 16 pupils from the additional learning needs department at Ysgol Bro Pedr in Lampeter to create a piece of artwork inspired by the unique features of their area.

“The project came about through a conversation with Ysgol Bro Pedr, and the opportunity to meet their needs at that School. This was the first time many of these young people had been directly and actively involved in the arts, and seeing the enjoyment as well as the personal and professional development underlined the need for more of this kind of provision. By working with Literature Wales and Urdd Gobaith Cymru, and by extending this into a national project, this will put the ideas and work of young people across Wales at the heart of creativity, and that is extremely important to us as a company.”

This year, pupils from three secondary schools will take part in the Criw Creu project: Criw Hwb from Ysgol Tryfan Bangor, Life Skills pupils at Ysgol Penweddig Aberystwyth and a group from Ysgol Plasmawr in Cardiff. This is the first time that many of these pupils have had the opportunity to work with professional artists and performers. Everyone is looking forward to the opportunity, as explained by the pupils and teachers:

“The last two years have been difficult for us as pupils, so it’s nice to have the opportunity to do something new and different that excites us. We’re looking forward to learning new skills and seeing our work on the big screen”.

“All of the pupils are really excited by this project, especially after a session to introduce them to the project in early December. It was lovely to see a group of pupils working together and having the opportunity to gain new experiences and represent our school. This is an amazing opportunity for our learners to gain confidence and work on key skills as they create a film based on their own ideas. I’ve received wonderful feedback from parents and pupils, and I look forward to seeing the project really get underway in January”.

“Penweddig pupils are very keen to get involved in the project, because the activities have been tailored to them specifically, which is a great opportunity”.

Fortunately, the pupils won’t have to wait for long, as the first Criw Creu workshops will be held this Wednesday, 12th January. Thanks to the support of Literature Wales, the pupils will have the opportunity to work with none other than Casi Wyn, Bardd Plant Cymru, Welsh language Children’s Laureate, to create original pieces of poetry.

Bardd Plant Cymru (Welsh-language Children’s Laureate) is a national ambassadorial role which aims to inspire and empower children and young people across Wales through literature. The project is managed by Literature Wales with the support of the Welsh Government, S4C, the Welsh Books Council and Urdd Gobaith Cymru.

Later this month and in February, the pupils will have a variety of further workshops: animation workshops with Sioned Medi Evans from SMEI, and drama workshops with Sian Elin from Theatr Genedlaethol Cymru. Thanks to Urdd Gobaith Cymru, the pupils will also have the opportunity to collaborate and record music with great musicians such as Marged Gwenllian, Osian Rhys, Caryl Griffiths, Seimon Thomas and Lewys Wyn Jones.

All the work developed by the young people as part of the Criw Creu project will be showcased via three short films, in a special event at the individual schools, and online during the summer term.