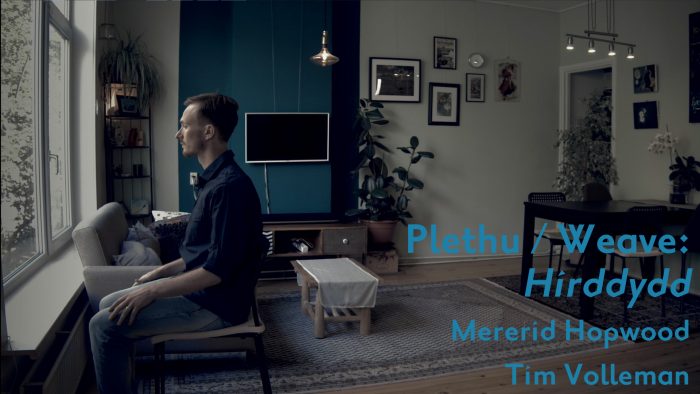 This is a translation of a blog written by Mererid Hopwood as a part of Plethu/Weave, an online collaborative project between Literature Wales and National Dance Company Wales.

The ninth of June was the first time I had contact with Tim Vollemann. It came via email offering to meet on FaceTime, Teams, Zoom, Signal or Jitsi. After two months of the lockdown, I was pleased that by now I was familiar with at least the first three platforms, and we arranged a face-to-face-meeting-from-afar on Friday 12th. We needed to respond quickly as the whole project was to be completed within the month.

As it happens, the month in question coincided with a campaign organised by Cymdeithas y Cymod (The Fellowship of Reconciliation in Wales) to commemorate the 80th anniversary of the Great Clearance of Epynt Mountain. On the 30th of June, the summer solstice, 1940, as the Second World War had taken hold of people’s worst fears, without warning 219 inhabitants of the old mountain were evicted and displaced by the might of the Armed Forces. The land, it seemed, was needed more for warfare than for crops and communities. Overnight, centuries and generations of neighbourliness were shattered.

To this day, the British army continues to practice warfare on around 40,000 acres of the area, leaving such evocative names as Gilfach yr Haidd, Ffrwd Wen, and Disgwylfa just an echo on the breath of the wind.

It also coincided with two months of frantic preparation for the Eisteddfod AmGen, (our Covid-alternative national cultural festival). Its energetic organisers had decided that material was needed for a couple of months lead-in, before the traditional ‘big week’ at the beginning of August. And as part of this preparation, I was trying to write a lecture that would address in some way the issue of Epynt and the militarisation of Wales…

‘A thina’r meddilie’, … ‘and such were the thoughts’ as the poet, Dewi Emrys, once said, that were in my head when FaceTime’s ‘brrlip brrlip’ promptly came on Friday afternoon conjuring Tim’s face all the way from Rotterdam in the Netherlands to my desk in Carmarthen.

We had a lively discussion. As a member of National Dance Company Wales, Tim was of course familiar with our country, but like so many Welsh residents, had never heard of the history of the Epynt. He had no idea that on the mountain was a fake German village solely in order for soldiers to practice Warcraft not on designated battlefields, but on civvy-street, amidst the homes of peaceful people who have neither weapon nor argument.

How could that be conveyed in dance? And what about the project themes of ‘weaving’ and ‘harmony’?

We would have to meet again.

Tim went on a search for locations… ideally a mountain in the plains of his Rotterdam (!?), and I searched for words.

The next time we met, the lecture had a title: ‘Daw’r Wennol yn ôl i’w nyth’,  (‘The Swallow returns to its nest’). I wanted to look at Waldo Williams’ poem where he describes how the people of South Pembrokeshire lost their homes in similar circumstances to the families of the Epynt. Though the poem is full of grief, it ends with hope: ‘The Swallow returns to its Nest’. Hope is key.

Could Tim find a swallow in his dance, we wondered …?

From the gwennol/swallow in its nest our conversation went to the other meaning of gwennol in Welsh, namely the shuttle of the machine in the woollen factory, and we both heard the shi-sha-shi-sha of the weaving as possible music in the film. I phoned Melin Tregwynt, which is near my mother’s family home, to see if the sound could be recorded? But like all other factories, the machines there had been temporarily silenced.

In the meantime, Tim had great success, if he hadn’t been able to conjure a mountain, he had found all sorts of other magical locations. And by about the fourth meeting we literally had the silver strand of our project, more or less. The fibre of our belonging. Not Tim’s and mine – but everyone’s.

From there, the pieces started to fall into place.

There was no swallow, but there was hope.

There was no woollen factory, but there was the thread of belonging.

In the loft between old coats and blankets the poem was recorded, and many miles to the east, the scenes were danced and filmed.

And in this way, the snippets weaved their way back and forth over the water.

Today, with the project in hand, I am enjoying the first day of a short holiday and have reached for a book that I have been looking forward to reading for some time.

As it happens, it is the work of one of Tim’s countrymen, Humankind by Rutger Bregman. It opens with this statement: ‘This is a book about a radical idea’. And the idea? ‘That most people, deep down, are pretty decent.’[1] It echoes the mindset of one of my countrymen. Eighty-two years ago, Waldo Williams, the poet of the swallow of hope, described social and military oppression as:

‘something that is alien to humankind at its core, as we must believe if we are to believe that there will come a day when this oppression will be alien to history, because it is the very core that determines the end of history’.

Thank you for the opportunity to try to express this ‘deep-down’ core, this radical idea.

Find the pattern that binds hearts.

You can view Mererid and Tim’s short film, Hirddydd, below: