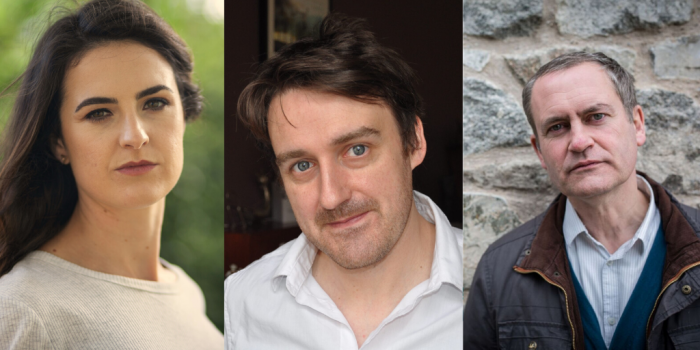 Literature Wales is pleased to be a part of Gŵyl Ffor Arall’s schedule of events this year. Ifor ap Glyn, National Poet of Wales is hosting two sessions in conversation with Celtic poets Ciara Ní É and Pàdraig MacAoidh.

In the first session, Ifor is joined by Irish poet and broadcaster Ciara Ní É, who shares her poetry speaks about her background and motivation to follow in her path and break new ground in Irish poetry.

Poet Ciara Ní É is one of the most exciting young talents in contemporary Irish literature; her poems are challenging, feminist and playful. Ciara is Dublin City University Writer in Residence 2020 and Irish Writers Centre ambassador. She is also the founder of REIC, a multilingual open mic evening held monthly in Dublin that includes poetry, music, storytelling and rap. Ciara is a spoken word performer and her video poems have attracted wide attention in Ireland and internationally.

In the second session, Ifor is joined by Gaelic poet Pàdraig MacAoidh for a discussion surrounding poetry, language and bilingualism.

Pàdraig MacAoidh is a native Gaelic speaker from the Isle of Lewis in the Outer Hebrides. He is an academic, a writer and broadcaster whose work is influenced by the diverse linguistic heritage of his birthplace. As such, he writes in Scottish-Gaelic as well as English, and links the traditions of the old languages and the myths and tropes that they transmit, with a present which is marked by constant breaks, a continual changing and remembering. His debut collection, Gu Leòr / Galore, was published by Acair.

Each session can be viewed as follows:

These sessions will be through the medium of English, with performances in Irish and Gaelic. English translations will appear on screen.

Ifor, Ciara and Pàdraig are currently collaborating on another project, Mother tongue, which explores identities and how languages ​​continue to evolve. The project will culminate in a collection of video poems and is supported by Culturlann Belfast, the British Council in Wales, Scottish Poetry Library and Literature Wales.

For further information about Gŵyl Ffor Arall and to view the entire schedule, visit: https://gwylarall.com/