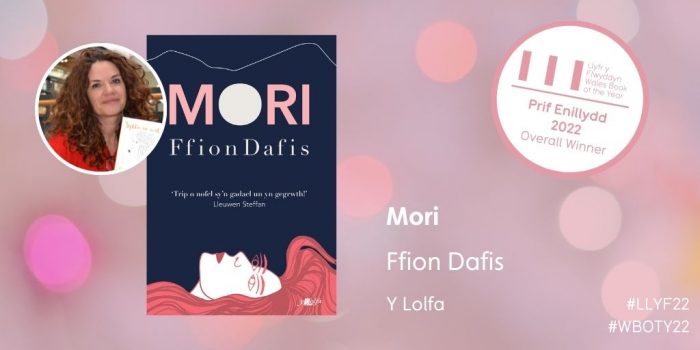 We are delighted to announced that the winner of the Welsh-language Wales Book of the Year Award 2022 is the “masterpiece” Mori (Y Lolfa) by Ffion Dafis.

The news was announced on BBC Radio Cymru during a special edition of the culture show, Stiwdio. Presenter Nia Roberts was joined by Leusa Llewelyn, Joint Interim CEO of Literature Wales; Owain Schiavone, Golwg360, and all the Wales Book of the Year category winners.

A powerful contemporary story, Mori is the first novel from the actress and presenter Ffion Dafis following the success of Syllu ar Walia (Y Lolfa, 2017). The novel follows Morfudd and her obsession with a girl who sends a request to be her friend on social media. Her relationship with the girl forces Morfudd to face the secrets of her past and embark on a journey of self-discovery and acceptance which takes her to very dark places.

Ffion Dafis is originally from Bangor, and is a familiar name in the arts sector in Wales. She is known for playing the role of Llinos in the television series Amdani and Rhiannon in Byw Celwydd on S4C. She played the part of Lady Macbeth in Theatr Genedlaethol Cymru’s ground-breaking production of Shakespeare’s play at Caerphilly Castle in 2017.

Ffion receives a cash-prize of £4,000, as well as a trophy designed and created by the artist Angharad Pearce Jones.

This is the fourth year running that a novel has been named the Welsh-language Wales Book of the Year. Mori follows tu ôl i’r awyr by Megan Angharad Hunter, Babel by Ifan Morgan Jones, and Llyfr Glas Nebo by Manon Steffan Ros in the chain of novels to receive the coveted title. These four books are published by Y Lolfa.

The Awards are judged by an independent panel appointed annually. Judging the Welsh-language books this year are broadcaster Mirain Iwerydd, presenter of BBC Radio Cymru 2’s Sunday Breakfast Show; presenter and columnist Melanie Owen; the academic, editor and author of the academic journal, Llên Cymru, Siwan Rosser; and the director, poet and writer Gwion Hallam **. Gwion Hallam, however, was not part of the discussions about the fiction category or the main prize due to a conflict of interest.

On behalf of the Panel, Mirain Iwerydd said: “Reading Mori was like creeping into the recesses of the main character’s mind and experiencing all that transpired through her eyes. Writing a character like Mori is no mean feat. She is complicated, and occasionally very dark thoughts cross her mind. The novel takes chances and explores themes and subjects which haven’t been discussed in Welsh-language literature in such a manner before. I believe that Mori’s character alone is a masterpiece, but combine this with the careful weaving of humorous and skilled narrative created by Ffion Dafis – well, that’s how you win Wales Book of the Year! Completely deserved. Congratulations Ffion.”

This sentiment was echoed by judge Melanie Owen, who added: “Mori is an exceptional piece. Us three judges have very different tastes when it comes to literature, but Mori appealed to everyone. Ffion’s talent as a writer cannot be disputed – I look forward intently to read whatever she writes next.”

The Wales Book of the Year Award has been organized by Literature Wales since 2004, and during that time some of Wales’ most famous authors have received awards alongside new, bright talents.

Leusa Llewelyn, Literature Wales’ Joint Interim CEO said: “Congratulations to Ffion Dafis for winning the Wales Book of the Year Award with Mori, a novel which has given us a Blodeuwedd-esque antiheroine to marvel at and fear all at once. It’s wonderful to see a new novelist succeed this year, and I hope this will inspire other emerging writers across Wales to put pen to paper.

Congratulations to the Y Pump writers and co-writers, an ambitious and pioneering project which platforms new and future writers and their own unique stories. The series sets the tone to transform our literary landscape, helps underrepresented writers use their voice, and does all of this with bells and whistles. We’re extremely lucky to have writers like these creating work in Welsh, and it’s no surprise that they’ve captured the popular vote and won the Golwg360 Barn y Bobl award.”

Find out more about all of this years category winners on the Wales Book of the Year page.