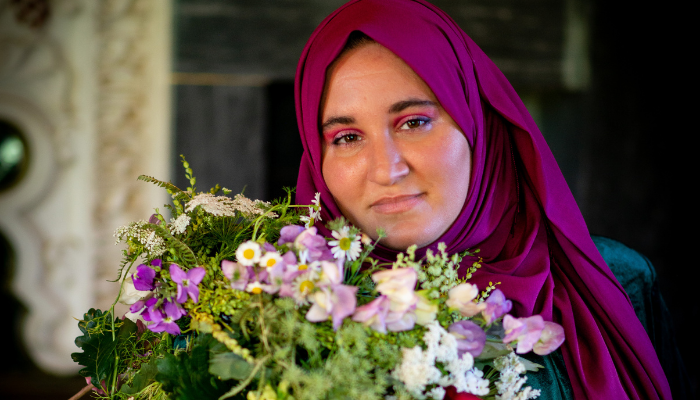 Hanan, a poet whose “words are like ribbons weaving languages and cultures together,” will take on the challenging and prestigious role of National Poet of Wales for the next three years (2022-2025), representing and celebrating writing from Wales both at home and abroad. As National Poet of Wales, she will represent the diverse cultures and languages of Wales and act as an ambassador for the people of Wales. She will address the most important issues of our time through poetry, take poetry to new audiences, and encourage others to use their creative voice to inspire positive change.

“I am delighted to welcome Hanan Issa to the role of National Poet of Wales. She will act as a cultural ambassador for Wales, and I look forward to hearing her verse and how she responds to events during her tenure.”

Hanan is a Welsh-Iraqi poet, filmmaker and artist whose recent works include her poetry collection My Body Can House Two Hearts (Burning Eye Books, 2019) and her contribution to Welsh (Plural): Essays on the Future of Wales (Repeater Books, 2022) and The Mab (Unbound, 2022). She co-founded the Cardiff open-mic night Where I’m Coming From and has worked with the Bush Theatre, Channel 4 and Ffilm Cymru / BBC Wales. She was also a member of the first cohort of writers who took part in Literature Wales’ Representing Wales programme in 2021.

“Poetry exists in the bones of this country. I want people to recognise Wales as a country bursting with creativity: a land of poets and singers with so much to offer the arts. I’d like to continue the great work of my predecessors in promoting Wales, Welshness, and the Welsh language outside of its borders. More than anything, I want to capture the interest and inspiration of the public to see themselves in Welsh poetry and encourage a much more open sense of what Welshness is.”

Hanan will be the fifth poet to take on this role, following in the footsteps of Ifor ap Glyn, Gillian Clarke, Gwyn Thomas and Gwyneth Lewis. She was chosen as National Poet of Wales following a public call for nominations and an extensive selection process.

“Hanan is a thoughtful and engaged poet whose work I admire and she will bring a fresh voice to the national conversation. Croeso mawr i Hanan!”

On behalf of the selection panel, Ashok Ahir said:

“The panel had to choose between a varied range of poetic styles and voices, and it was excellent to see the high level of talent working in Wales today. This is a hugely exciting appointment. Hanan’s is a cross-community voice that speaks to every part of the country. She will be a great ambassador for a culturally diverse and outward looking nation.”

“This is a poet who writes widely, her words are like ribbons weaving languages and cultures together, she broadens the mind and sharpens the eyes. If you’re not already familiar with her work, go and look for it immediately. I can’t wait to see what Hanan will achieve in the role.”

Literature Wales looks forward to working with Hanan during her tenure as National Poet of Wales 2022-25 as she makes the role her own. We’re excited to see how Hanan will reflect and contribute to our national conversation during her time as our National Poet.

More information about Hanan and the role of National Poet of Wales is available here.

Lle-CHI: National Poet of Wales to lead a week-long series of community events