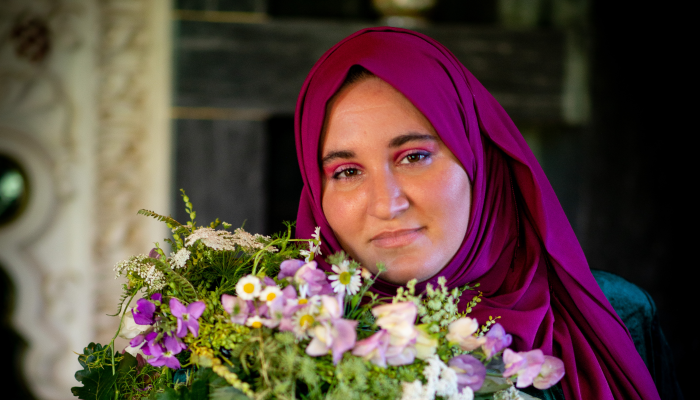 Photo Credit: Camera Sioned / Literature Wales
To mark the 70-year anniversary of the first broadcast of Dylan Thomas‘ A Child’s Christmas in Wales, Hanan Issa, National Poet of Wales has been commissioned to write a contemporary creative response to the festive classic.

Hanan Issa was in conversation with Dylan Moore in the sold-out event in Hay-on-Wye on the transcendent power of poetry and Wales’ strong lyrical heritage where the new commission was premiered.

The new commission was released in a special Hay Festival podcast and on the festival’s YouTube channel on 1 December 2022.

“I suppose it’s karma that I mix up my Christmases, summers, Eids and winters.” – Hanan Issa

The National Poet of Wales’ new commission describes her own experience of Christmases past, and wonders what her son’s future will hold.

Hanan said: “Dylan Thomas’ iconic piece has endured as an indulgent, comforting tale to generations. It speaks to that very universal desire to recover something lost, to relive a happy memory. I was excited when Hay approached me with this challenging commission since it encouraged me to explore how we retain memories and images of innocence, as well as the less rose-tinted prospect facing young people today.

“I wish I could say that my son’s Christmases, Eids and winters are as carefree as mine or those of Dylan Thomas”.

Dylan Moore is a former recipient of the same Fellowship, editor of The Welsh Agenda magazine and author of Many Rivers to Cross (Three Impostors, 2021).

‘Hold You’, a poem for World Alzheimer’s Day by the National Poet of Wales

Wales’ National Poets: Passing on the baton, showing our gratitude, and putting a foot on the gas!