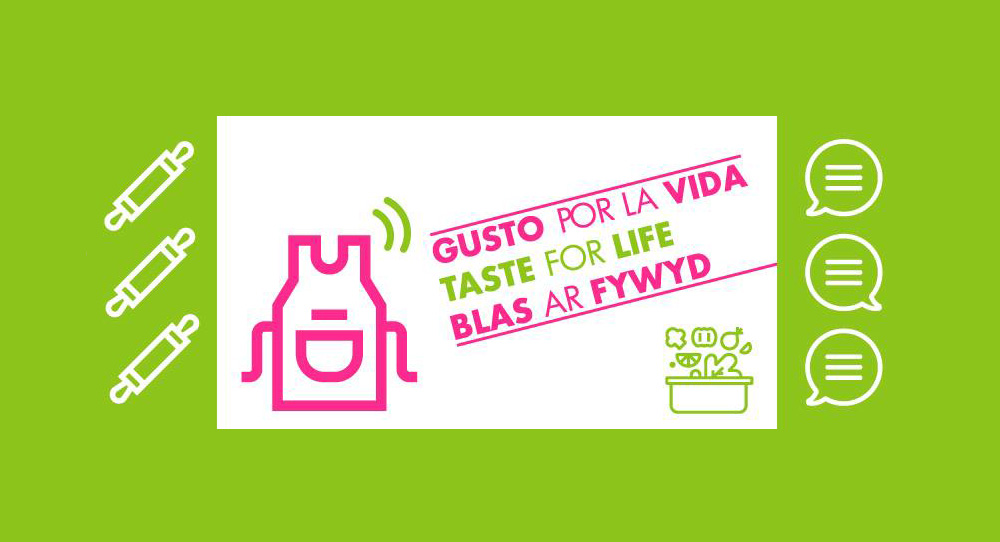 ‘My Life’s been an adventure and I still want it to be adventurous’ – Margaret, Caerphilly.

So begins one of the films made as part of A Taste for Life | Gusto por la vida | Blas ar fywyd, a Tandem Europe collaboration project between Literature Wales and Solidarios Para el Desarrollo in Spain.

From 2017-2018, Literature Wales and Solidarios para el Desarrollo collaborated on a new and innovative international project aiming to tackle loneliness and isolation amongst older people. A Taste for Life | Gusto por la Vida | Blas ar Fywyd used storytelling techniques and the universal interest in local and international food to raise the profile and voice of older people and their important role in the community. The trilingual (Welsh/Spanish/English) project collected six individual stories, from three people in Wales and three in Spain, using favourite recipes as a basis for sharing stories about their lives and cultures with others.

One of the Spanish participants, Jacinta said: “I felt good throughout the activity and also very happy. Normally I spend all day worrying about many things, but on the day of the project, while cooking and telling my story, I forgot everything and had a great time!”

On 15 November 2018 the project’s open Facebook page was launched, which people across the world can access to view participants’ videos, listen to and read their trilingual stories, and follow their recipes. Also published on the Facebook page are poems written by Welsh poets Mike Church and clare e. potter inspired by the lives of the participants.

Addressing loneliness amongst older people is an EU-wide priority for public health, and one which forms part of Literature Wales and Solidarios Para el Desarrollo’s strategic aims. Over 1 million older people in the UK and almost 2 million in Spain live alone. Studies from the USA, Europe, Asia, and Australia show that loneliness is a greater threat to public health than obesity and that improved social connections could reduce 50% of premature deaths in isolated older people.

Lleucu Siencyn, Chief Executive of Literature Wales said: “We feel extremely lucky to have participated in the Tandem Europe programme and have benefited greatly from sharing with and learning good practice from our partner organisation Solidarios. The scheme has taken our colleagues from Portugal to Deri, Milan to Caerphilly, and from Madrid to Cardiff. We’ve shared a Spanish omelette, a lentil soup and tea and toast, and most importantly of all, we’ve seen six individuals share their stories.”

Alfonso Fajardo Barreras, the Director of Solidarios said: “The Tandem programme has been an opportunity to show the work we are doing and discover, learn, and get inspired by the work of Literature Wales. It helped us to be more creative, innovative and develop a new initiative that would have been difficult to realize without this collaboration. Finally, I think that it also allowed to the older persons with whom we are working to feel as protagonists in an international experience: what they feel and tell us, that is the most important.”

Literature Wales was successful in being selected to participate in the prestigious and competitive Tandem Europe programme, a cross-border collaboration scheme that aims to bring about social change through cultural innovation activities.

You can read the full project plan below: