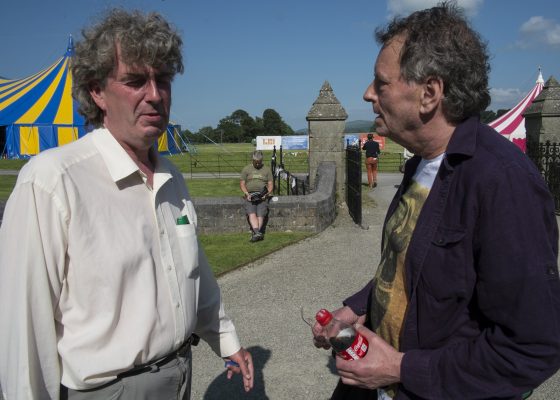 It was extremely sad to hear of the passing of David R Edwards, dazzling lyricist and vocalist of the ground-breaking band Datblygu. Literature Wales send our deepest condolences to his closest friends, especially Pat Morgan his fellow band member.

Since establishing Datblygu while still at school in Cardigan in the early 80s, Dave has created a wealth of work that deeply inspired his own generation, and subsequent ones. His influence has reached far and wide, with listeners and followers from around the world.

As well as the incredible legacy of his music, his literary influence is also significant. In print, he published a volume as part of Y Lolfa’s Beirdd Answyddogol series of anthologies, and he contributed to the magazine Tu Chwith. He published an autobiography and a volume of poems in English.

However, as with most poetry, his work was at its best when performed aloud. To appreciate Dave’s true art, his words need to be carefully listened to – set to the background of Pat Morgan’s uniquely gifted rhythms and music, many of his songs are like short stories. They lift a curtain on universal truths, and he had the rare ability to set a scene with exquisite and unexpected details.

As a live performer he was breath-taking, but we are also incredibly fortunate to have the richness and abundance of his recordings. The Wyau, Pyst, and Libertino albums are considered some of the most important and influential Welsh-language artworks of the twentieth century. Songs such as 23, Nofel o’r Hofel, Maes E, and Ugain i Un articulate his struggles with his personal demons with unique comparisons often never used before in Welsh literature or song-writing. And for Dave, our own society and culture also had its demons. He is arguably the greatest ever satirist to write in the Welsh-language – as we can hear in his classic songs Gwlad ar Fy Nghefn, Dafydd Iwan yn y Glaw, Cân i Gymru and many others.

But there was nothing cynical or mean about Dave as a person, and everyone who was lucky enough to meet him talks about his generosity and kindness. He was also extremely modest, which is extraordinary when considering his significant influence and popularity. He loved to meet his fans and was genuinely astonished that people would travel hundreds (and thousands) of miles to see him perform. He influenced many younger bands, including those who went on to form the ‘Cool Cymru’ groups of the ’90s, including Catatonia, Super Furry Animals, and Gorky’s Zygotic Mynci.

Despite the spells of illnesses he suffered over the years, Dave was still very productive, and he released his latest album Cwm Gwagle in 2020. He leaves an unparalleled legacy. He also leaves a huge gap. A hero to many of us, we are grateful, Dave, for everything.