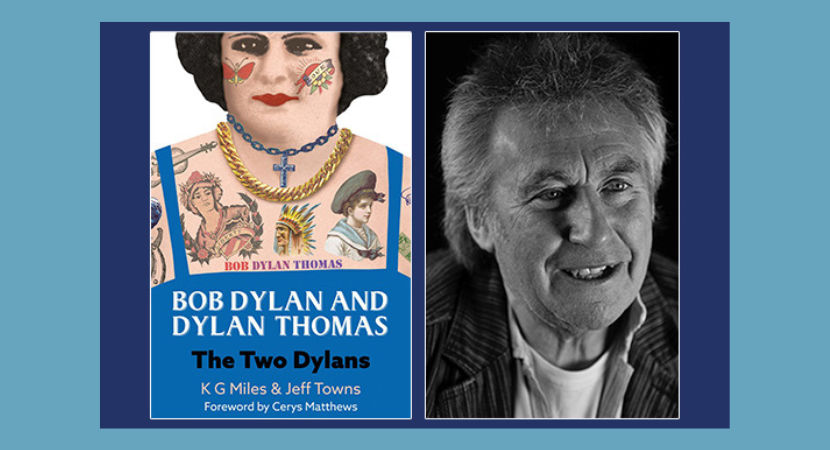 There are so many strange and wonderful connections and coincidences; shared passions and associations that tie these two cultural icons – Bob Dylan and Dylan Thomas together. This provides a rich tapestry – from the ancient Welsh folk tales of the Mabinogion to the poems of the Beat Generation; from Stravinsky to John Cale; from Johnnie Ray to Charlie Chaplin. Rimbaud and Lorca, Sgt. Pepper’s and ‘The Bells of Rhymney’, Nelson Algren and Tennessee Williams and much more.

And the wonderful connections between authors K G Miles and Jeff Towns makes it the perfect partnership to write this book. Fifty-two years ago, Jeff Towns opened his first bookstore in Swansea – he called it Dylans Bookshop – a youthful homage to the poet Dylan Thomas born and raised in Swansea. Eight years before, in 1962, (when he had never heard of Dylan Thomas), he bought Bob Dylan’s first ever LP called Bob Dylan with a track list; In My Time of Dyin’, Fixin’ to Die, See That My Grave is Kept Clean and so on; baker’s dozen of powerful songs. Jeff read that his new hero was born Robert Zimmerman but changed his name to Bob Dylan, a homage to Welsh poet Dylan Thomas. From that moment The Two Dylans became a constant backdrop to Jeff’s life.

And the two Dylans kept on giving – both on the cover of the Beatles Sgt. Pepper’s album. Peter Blake who fashioned the cover of Pepper, was a huge fan of Dylan Thomas’ radio play Under Milk Wood. Jeff went to see Peter, they became friends and still are. Peter gave permission to use his wonderful Tiny Tina image for the cover of this book.

London co-author K G Miles has been inspired by Bob Dylan since seeing Bob at his Isle of Wight Festival in 1969. He is now the co-curator the of the Dylan Room at London’s Troubadour Club and was honoured to address the inaugural conference at the Tulsa Archive in 2019.

‘…why, you can’t swing a cat without hitting a Dylan… male and female, such are the influences of these two cultural giants. Why did Dylan choose Dylan as his name, where do the worlds of these colossal culture vultures and wordsmiths collide? Some of the answers are found in the pages of this book and a lot more besides. I hope you enjoy the trip as much as I do.’ From the Foreword by Cerys Matthews

Jeff Towns is one of the world’s leading Dylan Thomas experts. He is a speaker, documentary maker and media commentator, and antiquarian bookdealer by trade, based in the poet’s home-town of Swansea. Jeff was originally known, both locally and globally as Jeff the Books. He is now known affectionately and professionally as The Dylan Thomas Guy. www.dylans.com

Co-author K G Miles is a leading authority on Bob Dylan and co-curator of the Dylan Room at London’s Troubadour Club. Through writing, podcasts and Dylan tours, K G Miles is able to share his knowledge and experience of Bob Dylan with music lovers throughout the world. Twitter: @barberville

The Golden Age of Crime Fiction