From Now On: Jemima Roberts 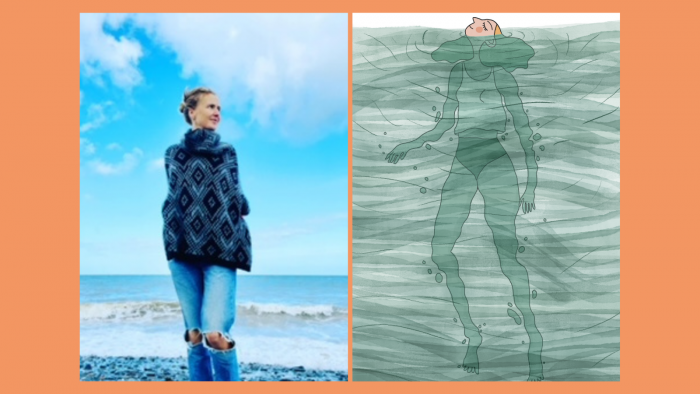 Excerpt from: Why I Swim in Wintry Seas

Swimming is in my blood. Water coursing my veins just as vitally, as the cells inked red. My Mum, now 70, swims every single day of the year – come rain, shine, sleet or ice. No wetsuit – just a swimming costume.

Back in the 80s, long before ‘wild swimming’ or ‘chill swimming’ became Instagram hashtags, sofa topics on morning telly, or subjects of scientific research into ways to ward off dementia – we just swam. Plain and simple.

As kids, we grew up in the rambles of a smallholding, on an old sprawling forestry estate in Mid Wales. Swimming in the river down the lane, was part of the lexicon of our upbringing. The gentle, gurgling stream a stone’s throw from our back door, wound its way down the hill to the wider, more grown-up, River Ystwyth.

Our most frequented spot was to trickle down to the ‘Dam’ for its craggy clamber, plunging pool and great gushing waterfall – at the bottom of our lane. On those summer days when the air hummed and buzzed with heat and insects, we ambled further, following a crows’ flight route across fields to the ‘Concrete Bridge’ (so-called for the concrete monstrosity of a bridge, somehow given the go-ahead by the Forestry Commission to bridge the Ystwyth and join the dusty tracks around the estate).

The Concrete Bridge however, did offer another prime swimming spot – for its lake-like expanse of water and sinuous curve along the frill of trees, as it meandered its way down the valley. This was a good place for launching makeshift rafts or dinghies made out of old tractor inner tubes. A wider, deeper spot than the Dam and all the better to accommodate the great octopus of the splashing and leaping limbs, of squealing kids.

Other days, if Mrs Whitley was not resident in her holiday home, wedged into the bank of the river as it was just down from our house – we trespassed by gentle stealth through her gates and across her garden. This took us down to another coveted swimming spot, known somewhat unimaginatively to us as, the ‘Bungalows’ (there were two of them – on either side of the track).

This was a slow, yawning pool that opened out like a mouth at the end of a long throat of stream, canopied in part by some large trees, extending their sturdy branches out across the water. These branches served as excellent diving boards and the pool on this bend of river, was deep enough for us to repeatedly launch ourselves in – on those long summer afternoons or satchel-slung-in-the-grass sessions after school.

The Bungalows was also, as I found out in my early teens, an excellent spot to snorkel. I will never forget what felt like a magical discovery to me – that with the simple aid of a mask and breathing ‘tube’ or ‘funnel’, I could stay underwater for hours before feeling any hint of cold.

There was so much to see and explore under the water too – all of which was largely imperceptible above water. Rocks and crags, caves, crannies and crevices. Pretty stones, sunken bits of riverflotsam and jetsam – or whatever the river equivalent is. The odd fish too – shooting past like a star, never to be seen again. Always a startling sight, but a reassuring one too. Life alive and thriving, alongside me in the river.

Our swim spots changed shape and character over the seasons and years. The shingle at the bottom of the Dam, for example, would drastically shape-shift during a storm or a deluge of heavy rain. Huge ‘dunes’ of stone would drift under water and congregate in new mounds, meaning that all of the deep and shallow parts which we could navigate with our eyes closed – would suddenly change shape and depth. It was always disorientating to go swimming after a storm as we’d have to tentatively feel our way into the water and map the new ‘terrain’. Discover afresh the deep pools and the shallower waters.

On sunny days, I would often go what I called ‘river trekking’. This usually extended across several days – returning home only when hungry for meals or as the sun dropped down behind the trees.

Dressed in shorts and t-shirt or sometimes, even in a skirt or dress – basically whatever I happened to be wearing, I would find a little entry spot on the bank of the river and slip in and slowly, gingerly, wade up stream. Often pausing for a sit down in the little waterfalls along the way – for a little bubble, scrub and rub on my back, or for the gauntlet challenge of not being pushed back down stream or off my stone. This always made me squeal with exhilarated glee, as even the seemingly small waterfalls in a river, are powerful – and playful with that muscle.

Now that I look back on it, I see that river trekking was my childlike way of centring myself, a way to retrieve some peace and space. A meditative practice, of sorts – and an innocent stab at a measure of independence too. I would tell Mum where I was going – and she would never raise and objection and so I slipped quietly off, by myself. It was an incredibly soothing, humming-under-my-breath sort of activity and I would invariably be gone for hours.

Perhaps some of my deep need to be in or near water, stems from that time. I’ve always been happiest near water. Soothed, calmed, instantly restored. Be that time spent sailing on boats, swimming in rivers and oceans or simply living near to them and knowing that they are there. Perhaps there is something of the universal/innate human need in there too. If you look on a map, the majority of human settlements are plotted along or close to sources of water.

In fact, I’ve always struggled with the idea of settling to live anywhere that isn’t close to water. I instantly feel suffocated and recoil at the thought – as though I really wouldn’t be able to breathe. Curious really, given how palpitant one’s breath can become, when trying to get into freezing cold water in winter!