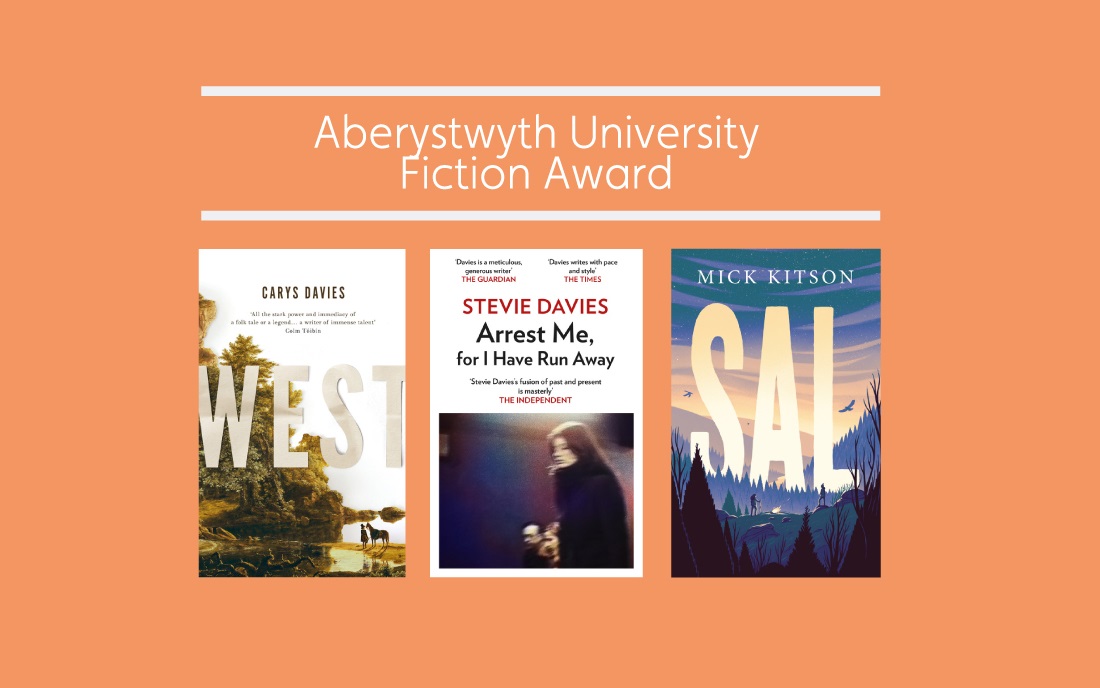 Rhodri Siôn and Catrin Mara read from the titles shortlisted for the 2019 Aberystwyth University Fiction Award:

Arrest Me, for I Have Run Away
Stevie Davies
(Parthian Books)

‘She has a special talent for cutting through the apparently ordinary and finding what is remarkable underneath; and, in doing so, reveals deep truths about the extremes of human nature’ – The Financial Times

Arrest Me, for I Have Run Away is stunning short story collection on human nature and identity. Stevie Davies’ latest work, it is bound to captivate and charm the reader.

STEVIE DAVIES was born in Salisbury, Wiltshire, though she lived in Swansea, Wales from a week old, and spent a nomadic childhood in Egypt, Scotland and Germany. After studying at Manchester University, sh went on to lecture there, returning to Swansea in 2001. She is Professor of Creative Writing at Swansea University. Stevie is both a Fellow of the Royal Society of Literature and a Fellow of the Welsh Academy. Her latest novel, Awakening, published by Parthian in 2013, was her twelfth. Stevie has won numerous awards for her fiction, and has been long-listed for the Booker and Orange Prizes. Several of her books have been adapted into radio and screenplays. She writes for the Guardian and Independent newspapers, and is a passionate sea-swimmer, cyclist and walker on the Gower.

‘All the stark power and immediacy of a folk tale or a legend…a writer of immense talent.’ – Colm Toibin

When Cy Bellman, American settler and widowed father of Bess, reads in the newspaper that huge ancient bones have been discovered in a Kentucky swamp, he leaves his small Pennsylvania farm and young daughter to find out if the rumours are true: that the giant monsters are still alive, and roam the uncharted wilderness beyond the Mississippi River.

West is the story of Bellman’s journey and of Bess, waiting at home for her father to return. Written with compassionate tenderness and magical thinking, it explores the courage of conviction, the transformative power of grief, the desire for knowledge and the pull of home, from an exceptionally talented and original British writer. It is a radiant and timeless epic-in-miniature, an eerie, electric monument to possibility.

CARYS DAVIES’S short stories have been widely published in magazines and anthologies and broadcast on BBC Radio 4. They have won the Jerwood Fiction Uncovered Prize, the Society of Authors’ Olive Cook Award, the Royal Society of Literature’s V S Pritchett Prize, and a Northern Writers’ Award, and her second collection, The Redemption of Galen Pike, won the Frank O’Connor International Short Story Award 2015

‘A vivid, moving tale about the strength of sisterhood and the struggle to survive’ – Observer

Sal planned it for almost a year before they ran. She nicked an Ordnance Survey map from the school library. She bought a compass, a Bear Grylls knife, waterproofs and a first aid kit from Amazon using stolen credit cards. She read the SAS Survival Handbook and watched loads of YouTube videos.

And now Sal knows a lot of stuff. Like how to build a shelter and start a fire. How to estimate distances, snare rabbits and shoot an airgun. And how to protect her sister, Peppa. Because Peppa is ten, which is how old Sal was when Robert started on her.

Told in Sal’s distinctive voice, and filled with the silent, dizzying beauty of rural Scotland, Sal is a disturbing, uplifting story of survival, of the kindness of strangers, and the irrepressible power of sisterly love; a love that can lead us to do extraordinary and unimaginable things.

MICK KITSON was born in South Wales, and studied English at university before launching the prolific 80s pop band, The Senators, with his brother Jim. He worked as a journalist for several years, then went on to become an English teacher.

Mick lives in Fife, Scotland with his wife Jill and bad-tempered dog Lucy. He has three grown-up children, and spends more time than is good for him fly fishing for sea trout, reading, playing the banjo and growing strawberries. He also builds boats. Sal is his first novel.

Back to Wales Book of the Year