Wales Book of the year Winners 2018 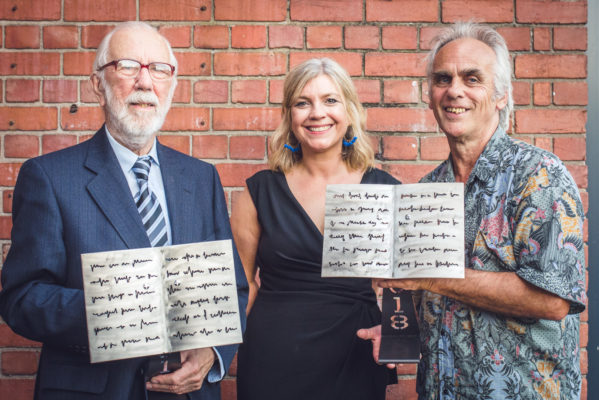 At a glittering Award Ceremony this evening in Cardiff, Robert Minhinnick’s highly acclaimed poetry collection, Diary of the Last Man (Carcanet) was named Wales Book of the Year 2018. The award is run by Literature Wales, the National Company for the development of literature in Wales.

Robert Minhinnick first took to the stage to collect the Roland Mathias Poetry Prize, before returning to be crowned winner of the 2018 Wales Book of the Year Award and receiving the overall prize of £4,000 and a specially commissioned trophy designed and created by the artist Angharad Pearce Jones. The prize was presented to Robert by the Chair of the Arts Council of Wales, Phil George.

Diary of the Last Man is described by the author as a walk across Britain; Brexit Britain, a Britain facing political uncertainty and experiencing change of all kinds, not least climate change. In parts immensely local, in others casting its view abroad, this collection is a celebration of the dwindling Earth, and a caution.

Speaking about Diary of the Last Man, Judge Carolyn Hitt said “This is environmentalism turned into elegy. It’s so powerful, so political. These are serious poems for serious times…that will stay with you and make you think about what we’re doing to the planet.”

This is the third time Robert has won the prestigious Wales Book of the Year Award. His poems have twice won the Forward Prize for ‘best individual poem’, and his winning collection, Diary of the Last Man was shortlisted for the T. S. Eliot prize in 2017.

The winner of the English-language Fiction Award is Light Switches Are My Kryptonite by Crystal Jeans (Honno), a funny, dark, shocking and warm novel which propels us through a week in its main character’s life and his journey of self-discovery. The winner of the English-language Creative Non-Fiction Award is All that is Wales by M. Wynn Thomas (University of Wales Press), a collection of essays on a number of English-language authors from Wales, offering a sample of the country’s internal diversity. The category winners each received a prize of £1,000.

The Wales Arts Review People’s Choice Prize was awarded to Tristan Hughes, who captured the imagination of the reading public with his novel, Hummingbird (Parthian). The Awards are judged by an annually selected independent judging panel. This year’s panel are columnist, producer and author Carolyn Hitt; distinguished poet and editor Kathryn Gray; and multiple award-winning author Cynan Jones.

Speaking on behalf of the judging panel, Kathryn Gray said: “Wales Book of the Year celebrates the brilliant achievements of our literature. And it’s a testament to the exceptional quality of the writers who ultimately prevailed to emphasise that this was a particularly strong year across the categories. Our winners have produced what we consider to be essential contributions, packing a beautiful punch – as only the best writing can do. Judging this prize was, for all of us, an invigorating experience. Our nation may be small, but Wales is home to fierce talent.”

The winning title of the overall Welsh-language Award as well as the Creative Non-fiction Award is Blodau Cymru: Byd y Planhigion by Goronwy Wynne (Y Lolfa), a comprehensive introduction by a renowned botanist to Welsh plants and flowers; their habitats, ecology, history and characteristics. The prize was presented to Goronwy by the Minister for Culture, Tourism and Sport, Lord Dafydd Elis-Thomas AM.

The Welsh-language Fiction Award winner is Gwales by Catrin Dafydd (Y Lolfa), and the winner of the Poetry Award is Hywel Griffiths with Llif Coch Awst (Cyhoeddiadau Barddas). This year’s Welsh-language submissions were judged by renowned broadcaster Beti George; winner of the Chair at the 2016 National Eisteddfod, Aneirin Karadog; and two-time previous Wales Book of the Year winner Caryl Lewis. The winner of the Golwg 360 Barn y Bobl (the Welsh-language people’s choice prize) is Peredur Lynch with his first poetry collection, Caeth a Rhydd (Gwasg Carreg Gwalch).

The Winners were announced at an Awards Ceremony held at Tramshed, Cardiff on Tuesday 26 June in the company of the competition’s judges, shortlisted writers and their guests, publishers, partners and members of the public.

Speaking at the Awards Ceremony, Chief Executive of Literature Wales, Lleucu Siencyn said whilst thanking all the partners for their support of this prize:  “Wales Book of the Year is one of the highlights of our cultural calendar. It’s vital that we have a national book award which gives a platform to all our literary genres – and treats our two languages equally. Wales consistently produces excellent writers, and this Award is testament to this each year. Congratulations to all of this year’s winners!”