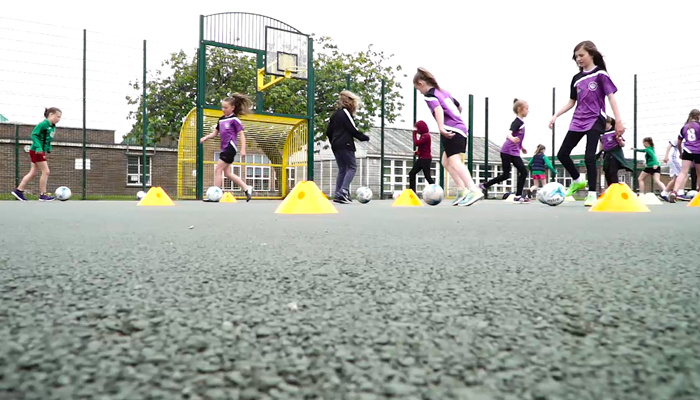 The City of Cardiff played host to the UEFA Women’s Champions League Final on 1 June with the Men’s final taking place at the National Stadium of Wales on 3 June.

To celebrate this landmark event for Cardiff and Wales as a whole, Literature Wales and the Cardiff City FC Foundation teamed up to offer football and poetry workshops inspired by the Champions League and female role models.

Girls from Ysgol Y Wern and Kitchener Primary Schools took part in football training sessions with the CCFC Foundation and worked with poet clare.e.potter over three days in May to create their own Champions League themed poems.

The participants also had the chance to meet and interview three inspirational women currently involved in sport. These were: Cardiff City Women’s team player Kanisha Underdown; Fan Engagement Manager at Cardiff City Football Club, Amy McNiven; and TV and radio presenter Fran Donovan who was treated to a special reading of the poem written by the female pupils from Ysgol Y Wern.

The project resulted in the creation of a short film celebrating women in sport, which will be shared online across Literature Wales and Cardiff City FC’s social media channels.

“Sometimes people are nasty and rude;
Make comments about the way you look,
What skin colour you are.
Rise above it, never stop believing.”
— Pupils from Kitchener Primary School

The film, which includes the two poems created by girls from Ysgol Y Wern and Kitchener Primary Schools, can also be viewed online here:

Lleucu Siencyn, Chief Executive of Literature Wales, said: “In Wales there is a close connection between literature and sport, and it’s wonderful to be able to welcome the world to Cardiff this weekend with the voices of some of our most talented young women.”

The project links to the Cardiff City FC Foundation’s Foundation’s existing Premier League Primary Stars initiative. Simon Stephens from the Foundation said: “It’s been fantastic to work with Literature Wales once again, using sport and literature as the tool to provide young females with a platform to express themselves and engage with strong female role models in the process.”

Each participant from the project has been provided one child and one adult ticket to attend the UEFA Women’s Champions League Final between Lyon and Paris Saint-Germain at the Cardiff City Stadium on Thursday 1 June 2017.

Ni Yw’r Merched And We Can Do Anything!

When I put my trainers on, I feel like I can go for it!
I run out the door, determined to go
like a fox about to chase a chicken.
I’ve got white shorts, a kit bag,
I can do sport with anything.

I put my shin pads on—no one can get past me.
I tighten my laces and tie back my hair.
Small steps build to big steps.

When I grow up I want to play
professionally because football is my passion,
football is my dream – mae merched yn gallu
gwneud pethau mae bechgyn yn gallu.

Cool, epic, fit, happy, energetic,
(Embarrassing dads on the side of the pitch)
cheering parents, smell of grass, and white paint.
In the rain, boots squelching.

Walking out of the changing rooms
with the rest of my team
the clip clop of our studs
like an army stomping through troubles.
My legs move swiftly.
I sprint down the wing. I feel unstoppable
helping my team mates score goals
stopping all opposition.

All my team are boys except me,
but girls have the same strength and agility.
My legs and arms pulling, pushing, working hard.
I feel free when I sprint like a cheetah,
all I need is faith in myself,
there goes the ball, I’m down the wing
I cross it in and 3,2,1 GOAL!!
When I score, celebration’s in the air
like all my birthdays at once.

I feel I can do anything boys can do
Nothing can stop me even
os dwi wedi methu’r penalty
dydy e ddim yn mynd i fy stopio fi.

Young women pushing themselves forward
is not easy. Don’t give up, work together
be the best you can be. Sweat. Push yourself
to the limit, a neb yn rhoi i fyny!

Sometimes people are nasty and rude;
Make comments about the way you look,
What skin colour you are.
Rise above it, never stop believing.

No difference between genders.

My confidence won’t be spoilt by rude comments
Because my mother, always there for me,
Never lets anyone get in her way,
She raises me, raises me,
Tells me to be the best I can be.