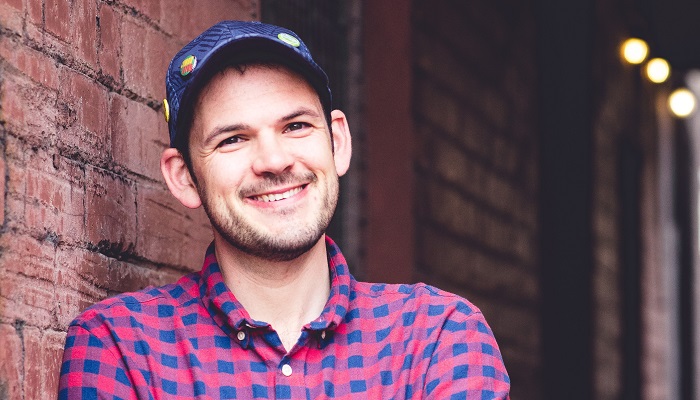 It was announced today from the main stage of the Cardiff and Vale Urdd National Eisteddfod that Gruffudd Owen is Bardd Plant Cymru 2019-2021 (Welsh-language children’s laureate). Eluned Morgan AM, Minister for International Relations and the Welsh Language revealed the news at a specially organised ceremony at the Donald Gordon Theatre, Wales Millennium Centre.

Gruffudd will be the sixteenth poet to be named Bardd Plant Cymru, taking over from the current laureate, Casia Wiliam in September 2019.

Bardd Plant Cymru is an ambassadorial role which aims to introduce literature to children in an energetic and dynamic way; promote children’s right to have their voices heard; and gives an opportunity for a writer to represent Wales on a national and international stage.

Gruffudd hails from Pwllheli in Gwynedd and now lives in Cardiff. He was educated at Ysgol Cymerau, Ysgol Glan y Môr, and Coleg Meirion Dwyfor Pwllheli, before going on to study Welsh at Aberystwyth University. He worked for ten years as a script editor for the television series Pobol y Cwm, and now works as a freelance writer and editor.

Appropriately, the announcement ceremony was held on the same stage where Gruffudd won the Drama Medal at the Urdd Eisteddfod in 2009, and the Chair at the National Eisteddfod last August.

Gruffudd is a renowned performer of poetry and music, and is a member of the bardic team, Y Ffoaduriaid, on the radio series Y Talwrn. He is also one of the organizers of Bragdy’r Beirdd poetry nights in Cardiff and has won many ‘stomp’ stools. In his spare time Gruffudd enjoys singing, cycling, climbing and juggling.

Gruffudd Owen said: “It’s a huge honour to be appointed Bardd Plant Cymru for 2019-21. Poetry has always been an important part of my life; I started scribbling silly poems in the back of my maths book in primary school! Nothing gives me more joy than seeing a room full of children laughing at a poem. Listening to poetry is an experience that binds us as a community. If the
Welsh language is to flourish among the next generation, that generation must experience it in all its funny, playful, unique and rich glory.

“I’d like to thank the Scheme’s partners and previous poets for setting such a solid foundation for this initiative. A special thank you to my predecessor, Casia Wiliam – she’s an incredible poet and a powerhouse! I can only hope that I can be worthy of her talent and enthusiasm.”

Reflecting on her period as Bardd Plant Cymru 2017-19, Casia Wiliam said: “I’ve had an amazing two years spent in the company of children from all kinds of different backgrounds – some with the Welsh language flowing freely out of their mouths, and others who’ve only just started to learn and get to know the old language; two years of being inspired by dedicated teachers; two years of stories and poems and laughter; and two years of cursing the sat nav for taking me the wrong way!

“My life will be much quieter and slightly poorer when this adventure comes to an end, but there’s definitely another adventure awaiting the children of Wales. I have no doubt that Gruff will be an outstanding Bardd Plant who will inspire children all over the country to love literature.”

Over the past two years Casia has engaged with over 4000 children across the country through creative writing workshops, many of whom were children whose first language is not Welsh.

During her tenure, Casia has broken new ground and has put her own stamp on the work. Humanitarian and environmental issues have been a substantial focus, embarking on activities such as a school workshop tour on the theme of Diversity; commissioned poems to raise awareness of the Earth Hour campaign and to mark the centenary of Save the Children; and a poem presented to the children’s wards of Wales’ hospitals to mark the 70th anniversary of the NHS in Wales. Casia has a number of upcoming projects over the summer before Gruffudd takes over in September. Visit the website to find out more: www.barddplant.cymru.

Lleucu Siencyn, Chief Executive of Literature Wales, said about the announcement: “This is an exciting appointment. Gruff is known for his humour and his modern poetry, and his workshops will undoubtedly spark the imagination of children in Wales.

“I’d like to take this opportunity to express my sincere thanks to Casia and congratulate her on what she’s achieved as Bardd Plant Cymru. Not only has she inspired hundreds of children, but she’s also introduced and highlighted important issues for the next generation, from human rights to climate change. She has clearly developed as a poet and author too, and I’m delighted to have been able to follow her journey over the past two years.

“We, and all the partners of the Bardd Plant Cymru scheme, are looking forward to seeing how Gruff makes the role his own over the next two years, and to follow his journey and development.”

Literature Wales are encouraging any schools, institutions, libraries or youth clubs wishing to apply for a visit from Bardd Plant Cymru to contact through www.barddplant.cymru.