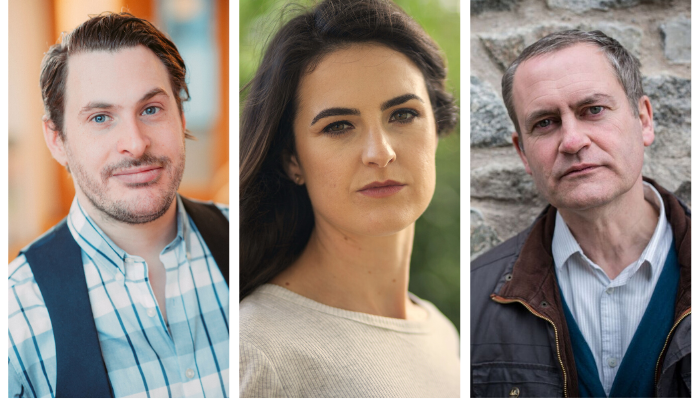 This month will see the culmination of a series of events in Berlin to celebrate the UNESCO year of indigenous languages with a panel discussion and performances at the Centre for British Studies, Humboldt University.

On 26 November, in an exciting multi-language event, Literature Wales’ Chief Executive, Lleucu Siencyn, will chair the panel discussion featuring National Poet of Wales Ifor ap Glyn, Irish writer and performer Ciara Ní É, and Scottish performance poet Marcas Mac an Tuairneir. The writers will share and discuss language, literature and identity in their countries and read extracts from their work. The discussion will be held in English, with poetry performed in the respective languages of the poets, Welsh, Irish and Gaelic.

2019 marks 30 years since the tearing down of the Berlin Wall, and to commemorate the occasion, National Poet of Wales Ifor ap Glyn has been commissioned to write a poem in response.

Born and bred in London to Welsh parents Ifor ap Glyn is a multi-award-winning poet, presenter, director and producer. Ifor has won the Crown at the National Eisteddfod – one of the festival’s most prestigious prizes – on two occasions, first in 1999 and most recently at the Denbighshire and District National Eisteddfod in 2013. From 2008-2009 Ifor was Bardd Plant Cymru, the Welsh-language Children’s Laureate.

Ifor has represented Welsh poetry around the world in both the Welsh and English language, having performed at festivals such as the Smithsonian Folk Life Festival in Washington DC.

Ciara Ní É (sounds like ‘knee yay’) is the founder of REIC, a monthly multilingual spoken word and open mic night that features poetry, music, storytelling and rap. She has performed internationally in New York, London, Brussels, Sweden, and across Ireland. Her work has been published in a variety of journals including Icarus and Comhar. She was chosen for Poetry Ireland’s Introductions series 2017, and in 2018 she released a series of four poetry videos in partnership with the Irish Writers Centre, available on YouTube. The video for ‘Phenomenal Woman’, a 2018 commission about the LGFA (Ladies Gaelic Football Association) was viewed over 300,000 times, and brought her to the attention of many. Other commissions include RTÉ TV, BBC Radio, TG4, and The Irish Writers Centre.

Marcas Mac an Tuairneir (Mark Spencer Turner) writes poetry, prose, drama and journalism, in Gaelic and English, and splits his time between Edinburgh and his hometown of York. He has two full collections in print: Deò (2013, Grace Note Publications) and Lus na Tùise (Lavender) (2016, Bradan Press), as well as beul-fo-bhonn (heelster-gowdie), a pamphlet co-written with Stuart A. Paterson (2017, Tapsalteerie). Marcas’ poetry has been published in various journals and short-listed for several poetry prizes including Duais Filíochta Dhúbhglas de hÍde and Comórtas Filíochta an Chornéil Eoghain Uí Néill. In 2017 he won the Wigtown Book Festival prize for Gaelic Poetry.
​
Marcas is an award-winning Gaelic-language playwright having won An Comunn Gàidhealach’s ‘Stornoway Gazette Trophy’ for new Gaelic plays, two years running, in 2016 and 2017. He was named Comhairle nan Leabhraichean and Playwright’s Studio Scotland’s ‘New Gaelic Playwright’ in 2016.
​
He is a regular contributor to Dàna, Cothrom Ùr and Bella Caledonia and is the Gaelic Editor of one of Scotland’s most exciting poetry periodicals, The Poet’s Republic. Marcas sings as a soloist, as well as with Trosg and Lothian Gaelic Choir. He has co-written songs with some of Gaeldom’s finest musicians including Mary Ann Kennedy and Gillie MacKenzie.

“This is a fantastic opportunity to celebrate the richness of our collective indigenous languages and literatures. Our participation in UNESCO’s Year of Indigenous Languages has provided us with a platform to raise Wales’s international profile as a bilingual nation and celebrate the history and resurgence in efforts to increase the number of speakers, striving for one million by 2050.

We want to show the world that the Welsh language is inclusive and key to Wales’ culture; we want to increase the use of Welsh, provide a space for it to evolve and welcome new people to the language.”

“We are delighted to be part of an international programme to celebrate Wales’ literary culture alongside our friends and partners from Scotland and Ireland. We have a shared history and heritage and our literatures and languages bring us closer together through the power of words and the imagination.”

“The Celtic nations are forging closer ties and, in many ways, the arts are driving important exchanges of ideas and innovation. The Scottish Poetry Library is playing its part too through collaborations and showcasing work by writers in indigenous languages, including Scots and Scottish Gaelic, on themes exploring place, voice, power and the impact and legacy of marginalisation and erasure on communities historically associated with these languages.”