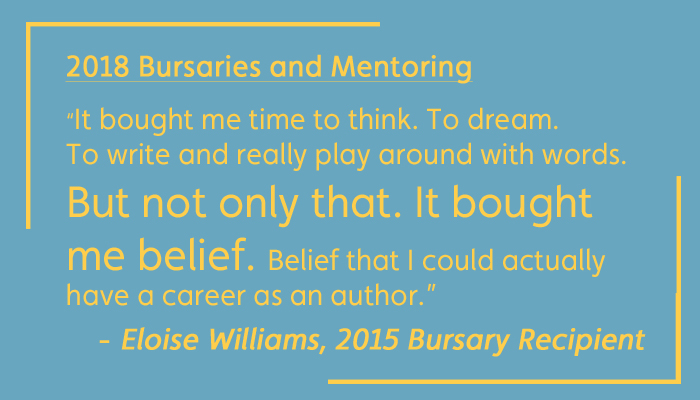 Literature Wales has announced that the next round of Writers’ Bursaries and Mentoring is now open for submission.

This marks a re-launch of Literature Wales’ established Writer Development schemes, with an increased focus on new and emerging writers, improved mentoring opportunities, as well as better links to industry professionals. Jonathan Edwards, who received a New Writer’s Bursary in 2011, said “That opportunity for an extended immersion in poetry, reading, writing and thinking, and not having to worry about any distractions, was crucial to my development.”

Changes to the Bursaries and Mentoring schemes have been made following a series of consultations with writers and members of the public throughout 2016 via focus groups, one-one-one meetings, as well as public questionnaires.

Literature Wales has taken on board the results of this consultation and some of the new developments include:

Funded by the National Lottery through the Arts Council of Wales, Literature Wales Writers’ Bursaries enable writers to focus on developing a specific work in progress across a twelve month period. Lleucu Roberts, who received a Bursary in 2012, said that it gave her “the opportunity to write what I wanted to write, for myself and no one else, whatever resulted from this work.”

Writers’ Bursaries are awarded to support writers creating new work in the following genres: novels, short stories, children’s literature, young adult fiction; poetry; graphic novels; creative non-fiction including literary criticism, biography/autobiography. Writers at all stages of their careers can apply for a bursary, which are awarded first and foremost according to excellence. An independent Panel is responsible for selecting the successful applicants.

Writers’ Bursaries are awarded annually. Since 2004, Literature Wales has awarded over £1.2 million in Writers’ Bursaries, supporting 259 writers across Wales, and generating 126 books and 16 articles.

2015 Bursary recipient Vanessa Savage said: “Finding time to write while running a business and raising a family has always been an issue – being awarded a Literature Wales Writers’ Bursary for The Murder House enabled me to finish a first draft. Having all that time to write full-time was a dream come true and it was instrumental in giving me the confidence to finish the book. I went on to work with literary agent Juliet Mushens of Caskie Mushens and The Murder House has just been bought by Little, Brown as part of a two book deal and will be published as a lead title by Sphere in early 2019.”

In addition, Literature Wales’ Mentoring Scheme for Writers has been extended. Places on the scheme are awarded to new and emerging writers at the start of their writing career. The Scheme offers support and practical advice to writers, to develop a specific work in progress to a publishable standard. The enhanced 2018 Mentoring scheme will begin with a tailored residential week-long course at Tŷ Newydd Writing Centre in February 2018, followed by individual one-to-one mentoring sessions with a mentor during the following months.

Literature Wales Chief Executive, Lleucu Siencyn, said: “We are pleased that the Bursaries and Mentoring Scheme will continue to be generously supported by the National Lottery through the Arts Council of Wales. Following our consultation with writers, Literature Wales is delighted to launch the 2018 Writers’ Bursaries and enhanced Mentoring Scheme. These schemes will specifically foster and develop new writers, as well as continuing to support writers across Wales at every stage of their careers. Through encouraging creativity, experimentation and risk-taking, we look forward to a wealth of new writing from Wales.”

Phil George, Chair of Arts Council of Wales added: “Arts Council of Wales is delighted to continue investing in literary talent. Supporting and rewarding talent is at the heart of what we believe in and these bursaries provide a great example of how together we can support literary flair and bring its power and energy to wider and wider audiences.”