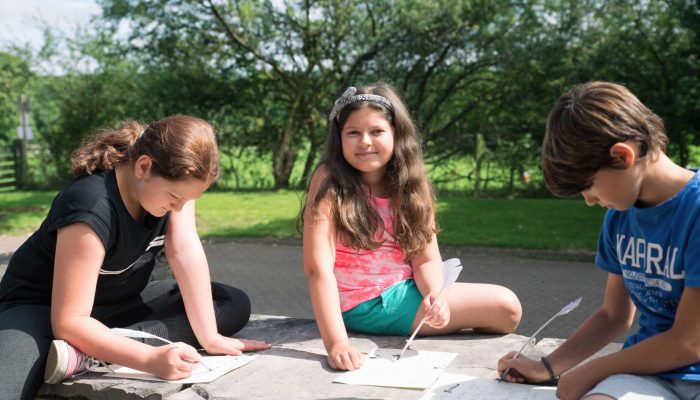 “It was really inspiring to hear the fantastic work produced on these projects,” said Catrin, “I recorded poems written by young people from the Caerphilly area in a workshopat Llancaiach Fawr Manor led by the poet clare.e.potter. The poems were of an incredibly high standard, really fresh and thought provoking. I also recorded with poet Francesca Kay at the St Baruc ward for dementia patients at Barry Hospital and with the up and coming rapper, Rufus Mufasa, who was recently awarded a Barbican Artworks Fellowship.”

The South Wales Literature Development Initiative uses writers to engage with communities throughout the area. “Writing the Future” showcases the remarkable poetry produced in these workshops and is being broadcast on Wednesday 5 October at 6.30 pm, on the eve of National Poetry Day.

Lleucu Siencyn, Chief Executive of Literature Wales, said, “We began the South Wales Literature Development Initiative in 2007. Far too many individuals and communities were not engaged so we started several pilot projects. We worked in sport – with boxing and football and got outdoors with the National Trust and in parks. The projects have produced some excellent work and we are keen to roll this out throughout Wales”.

Since August 2007, the South Wales Literature Development Initiative (SWLDI), has offered creative activities to groups and individuals who may not have had the opportunity to participate with mainstream arts and culture. Through the project, Literature Wales has, engaged with over 35,000 people, held over 900 events and organised over 200 tailor-made projects.

Writing the Future will be broadcast as a BBC Radio Wales Art Show Special Feature on Wednesday 5 October, 6.30 – 7.00 pm. You can listen live here, or you will be able to listen again on iPlayer.