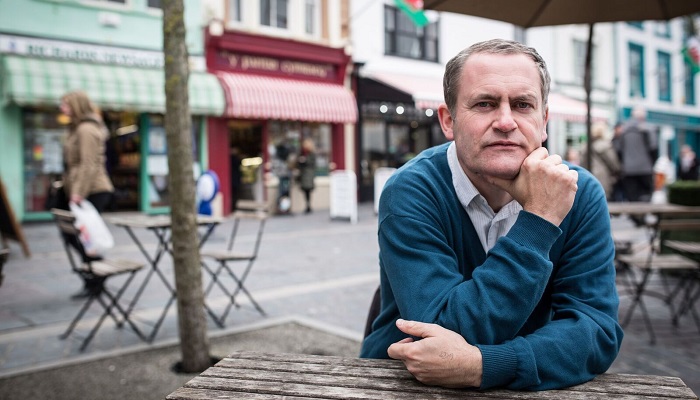 On Thursday 26 September, the official European Day of Languages, the Transpoesie Festival in Brussels began. Running from 26 September to 17 October, the festival celebrates the cultures of Europe through poetry. This year, Wales is one of the 22 countries and regions taking part in the festivities by sharing poems in their original languages and providing translations in French, English and Dutch.

A poem by Ifor ap Glyn, National Poet of Wales is one of many which will appear across the streets of Brussels during the three week festival. You can read Hydref Eto and its translations, and watch Ifor perform his poem on the Transpoesie website: http://www.transpoesie.eu/poems/859

Ifor will also take part in two events in Brussels on Thursday 17 October, sharing the stage with the poets Roseanne Watt from Scotland; Maire Zepf from Northern Ireland; Jonas Rasmussen from Sweden; and Haukur Ingarvsson from Iceland.

Joining Ifor in Brussels is the CEO of Literature Wales, Lleucu Siencyn, who has been invited to co-chair an event alongside Asif Khan, Director of Scottish Poetry Library, organised by the government offices of Wales, Scotland and Northern Ireland in Brussels. This event will feature poetry readings by Ifor ap Glyn, Roseanne Watt (Scotland) a Maire Zepf (Northern Ireland).

In our Strategic Plan for 2019-2022, we have structured all our activity under three Activity Pillars, and our involvement with the Transpoesie Festival forms part of our Wales’ Literary Culture pillar.

“We’re delighted to take part in this important festival. Poetry helps define who we are as a nation, both to ourselves and to the world. This is a fantastic opportunity for Ifor, in his role as a cultural ambassador to use poetry to share our cultures and our languages, and strengthen our connections with individuals and communities across Europe.”

Poetry readings will be performed by Ifor ap Glyn, Roseanne Watt (Scotland) a Maire Zepf (Northern Ireland). This event is organised by the government offices of Wales, Scotland and Northern Ireland in Brussels.

Poetry Readings by Ifor Ap Glyn from Wales; Roseanne Watt from Scotland; Maire Zepf from Northern Ireland; Jonas Rasmussen from Sweden; and Haukur Ingarvsson from Iceland. This event is organised by Transpoesie in collaboration with MondoCultures.

Call-out for Expressions of Interest