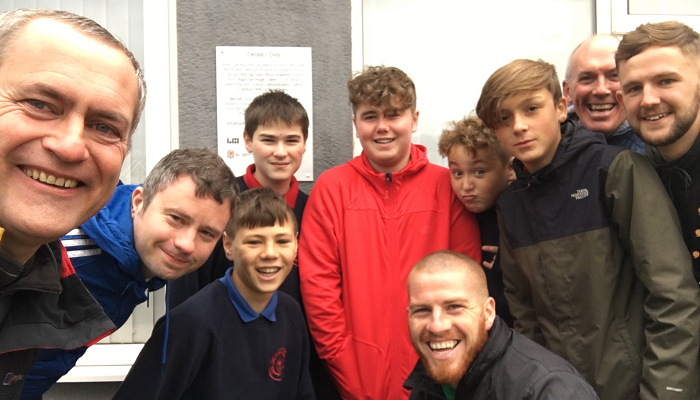 Eleven Welsh poems have appeared around Caernarfon Football Club over the summer – written by young people from the town as a celebration of the club. The poems can be seen across the Oval, the home of Caernarfon Town FC.

The poems were written by nine Year 8 pupils at Ysgol Syr Hugh Owen at workshops led by poets Ifor ap Glyn and Rhys Iorwerth. The boys are part of the TRAC 11-24 Gwynedd scheme, a project to support young people who are in danger of disengaging from education, and giving them positive experiences. The project was held in partnership between Literature Wales, TRAC Gwynedd and Cics Cymru, a Football Association of Wales scheme to encourage young people to take part in more sports.

Poetry and soccer activities are well established as a fun way to engage creatively, and the young people composed short poems on themes such as club pride, heroes and celebrations. The boys are very pleased to see their work displayed in the Oval and it is a great achievement for young people who are not often praised.

Ifor ap Glyn and Rhys Iorwerth are poets who live in Caernarfon. As enthusiastic football fans, they were the perfect workshop leaders for this new, unique project.

A short celebration was held at the Oval on Friday 21st September where the boys saw their words displayed around the football ground and received a copies of the poems to keep.

* Cofi = a person from Caernarfon