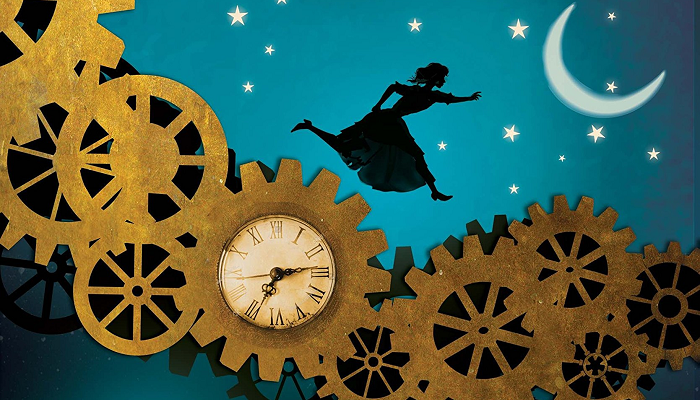 A magical story of snow and stars from acclaimed Welsh author Catherine Fisher has been shortlisted for the Blue Peter Book Awards 2019 in the Best Story category.

Published by award-winning indie publisher Firefly Press, The Clockwork Crow tells the story of spirited orphan Seren Rhys, and her cantankerous companion, the Crow, as they seek to unravel the mystery of a missing boy, in an adventure which takes them deep into the dangerous world of the Tylwyth Teg.

Set in Victorian mid Wales The Clockwork Crow has been hailed as, ‘A marvellous book, and a book of marvels, shivery with suspense, snow and sinister magic,’ by New Statesman reviewer Amanda Craig.  And writing in The Guardian Imogen Russell Williams said: ‘Full of deep fairytale resonance, Fisher’ writing stands out in the mind’s eye like blood drops on snow.’

Catherine Fisher is an acclaimed poet and children’s author from Newport, South-east Wales. Her bestselling books include The Times Children’s Book of the year Incarceron, The Snow-Walker trilogy, the Oracle trilogy and the Chronoptika series. Catherine was Wales’ first Young People’s Laureate (2011-2013) and has won a number of awards for her work.

Catherine Fisher said: ‘I am thrilled that The Clockwork Crow has reached the shortlist of such a prestigious award as the Blue Peter Book Award. I’m especially pleased for my publishers, Firefly, who worked so hard and have produced such an amazing cover. I hope everyone who reads the book enjoys Seren’s adventures with the magical Crow.’

Firefly publisher Penny Thomas added: ‘We are so delighted that Catherine’s magical tale has been shortlisted for this iconic award. She is one of the best fantasy writers in the UK today and this classic story enchants from the very first page.

‘It’s also really heartening for an independent children’s publisher based in Wales to know that the Blue Peter judges are looking to all parts of the UK for a thrilling and diverse range of shortlist titles. We hope the voters love The Clockwork Crow as much as we do!’

The Clockwork Crow is one of three books for ten year olds on the shortlist for the Blue Peter Book Awards 2019 Best Story category. The winner will be voted for by children and announced on the Blue Peter show along with the Best Book with Facts category on World Book Day, 7 March 2019.

Libraries Week challenge for the children of Wales