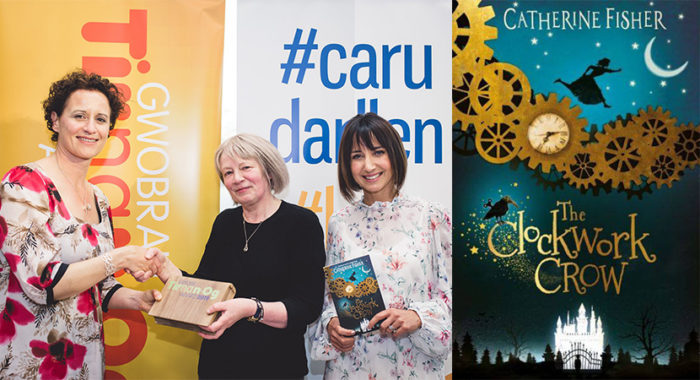 In a prestigious event held at the School of Journalism, Media and Culture, Cardiff University on 16 May, as part of the CILIP Wales Conference (Chartered Institute of Librarians and Information Professionals), this year’s award was presented to Catherine Fisher for her novel  The Clockwork Crow, published by Firefly Press.

Since its inception in 1976 the Welsh Books Council has annually celebrated the best English-language title with an authentic Welsh background.

The Clockwork Crow is a gripping tale of enchantment and belonging, set in a frost-bound mansion in snowy mid-Wales, When Seren Rhys is given a newspaper parcel by a stranger late at night in a freezing Victorian train station, she has no idea of what trouble it contains.

Catherine Fisher is an acclaimed poet and children’s author who lives in Newport. She graduated from the University of Wales with a degree in English and has worked in education and archaeology and as a lecturer in creative writing at the University of Glamorgan. She is a Fellow of the Welsh Academy and in 2013 was appointed the inaugural Young People’s Laureate for Wales.

Catherine has won many awards and received much critical acclaim for her work including the 1995 Tir Na n-Og Award for The Candleman.  The Clockwork Crow  was the winner of Wales Arts Review’s Welsh Books for Young People 2018 and was shortlisted for this year’s Blue Peter Book Awards.

Sioned Jacques, Chair of the Tir na n-Og English-language Panel, noted “This novel was considered by the panel to be imaginative, beautifully descriptive, captivating and derivative of many classic titles such as C.S. Lewis’ The Chronicles of Narnia. Yet it is still unique and typical of the high quality expected from an exceptionally talented author such as Catherine Fisher.”

She added “The main character is written in such a way as to make the reader want to be her and to feel empathy for her. It is well-edited with beautiful illustrations and contains some wonderfully atmospheric descriptions of the Welsh countryside.”

Catherine Fisher said, “I’m delighted to win the Tir na n-Og Prize.  The Clockwork Crow  is a novel that uses Welsh folklore and is set in a Welsh landscape. But I also hope that, as all imaginative fiction should, it will appeal to all readers everywhere.”

According to Helgard Krause, Chief Executive of the Welsh Books Council, “All the titles shortlisted for this year’s Tir na n-Og award were of an exceptionally high standard, reflecting the quality of books available for children and young adults at present. It is with great pleasure that we warmly congratulate Catherine Fisher and Firefly Press on their achievement.”

The Tir na n-Og English-language Award – which recognises the exceptional quality of books with a Welsh background for children and young adults – is sponsored annually by CILIP Wales.

The event began with an entertaining panel discussion in the company of all shortlisted authors and chaired by broadcaster and author Lucy Owen. A crew of avid young readers were invited to quiz the authors as part of this year’s shadowing scheme. Free resource packs were also available online so that schools could adopt the role of unofficial judges.

The winning titles in the primary and secondary Welsh-language categories will be revealed on 30 May at the 2019 Cardiff and the Vale Urdd National Eisteddfod at The Millennium Centre, Cardiff.