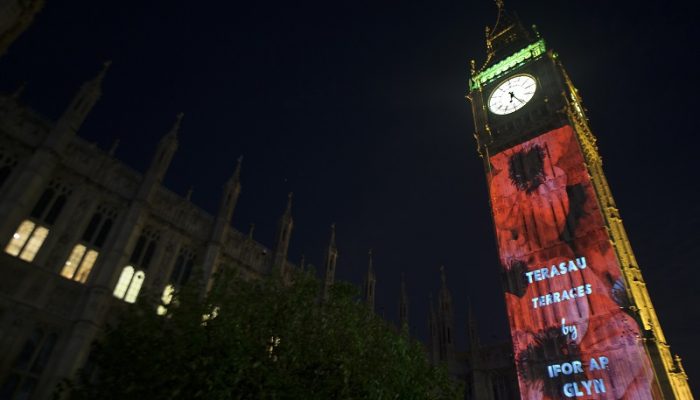 For a third year, falling poppies will be projected onto the Elizabeth Tower (Big Ben) from dusk on Remembrance Sunday. A special addition to this year’s projection will be a series of War poems. The poems have been chosen by the Poet Laureate, the National Poets from the four nations of the United Kingdom and the Children’s Laureate.

The National Poet of Wales (Bardd Cenedlaethol Cymru), Ifor ap Glyn has selected his poem Terasau to be projected.

The Remembrance Sunday projection is a key moment in Parliament’s contribution to the centenary commemorations, which also includes historical and educational resources that have been made available on Parliament’s website.

To be asked to contribute to this year’s commemoration  is a tremendous honour. As a Welsh speaker born and bred in London, to see my mother tongue projected on one of the city’s best known buildings is also an incredible thrill.

My family have lived in London since the 1880’s, a small Welsh thread in the international tapestry of the city, and for me, the  inclusion of this poem also acknowledges the rich contribution to London culture of the hundreds and thousands of us whose first language is not English. And as we commemorate the fallen once again, it is fitting that we remember that men of many cultures were numbered in their midst.

Terasau was inspired by a visit to the military cemeteries of the Somme, the humbling scale of loss and the near impossibility of ‘knowing’ the men who lie there.

Rt. Hon. John Bercow MP, Speaker of the House of Commons said: “The Elizabeth Tower is an internationally recognised symbol of democracy, and it is right that we remember – both with words and the poignant symbolism of the falling poppies – all those who have fought and died in the course of protecting that democracy.”

Rt. Hon Keith Simpson MP, Chair of the World War One Commemoration Group said: “For a third year the poppy projection will be made on the Elizabeth Tower with this year the addition of the words of well-known War Poets. It is appropriate that Parliament commemorates the sacrifices made by the British people in the First World War.”

The poems which will be projected are: