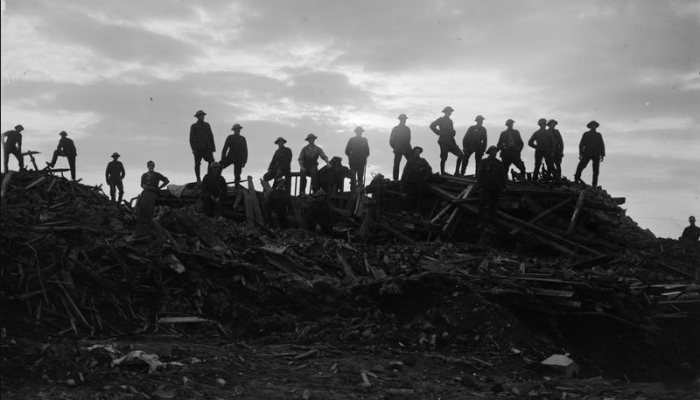 © IWM (Q 2711)
Literature Wales has announced an international programme to commemorate the death of Welsh poet Hedd Wyn and other World War One writers such as the Irish poet Francis Ledwidge who, like Hedd Wyn, died on 31 July 1917.

The aim of the project is to collaborate with Flanders in organising cultural events to note this centenary and to increase our understanding of its importance. Using literature, history and other art forms we will encourage discussion on contemporary themes which echo some of those which were as significant a hundred years ago as they are today.

The project, entitled Barddoniaeth Colled | Poetry of Loss, will be delivered by Literature Wales, in partnership with the Welsh Government’s Cymru’n Cofio Wales Remembers 1914-1918 First World War Centenary Programme, and the Government of Flanders. Snowdonia National Park Authority is also a partner in the project.

National Poet of Wales, Ifor ap Glyn, will figure-head the Poetry of Loss project, which will include an evening of talks and readings in Brussels, writers’ residency exchanges between Flanders and Wales, and a specially-commissioned multi-media poetry performance.

This year marks 100 years since the Third Battle of Ypres (Passchendaele) where thousands of soldiers were killed, and approximately 3,000 casualties among the 38th (Welsh) Division. One of those who fell in battle was Hedd Wyn (real name Ellis Humphrey Evans), the poet from Meirionnydd who died before being announced winner of the Chair at the National Eisteddfod in Birkenhead later that year.

The empty chair was draped in black, and Hedd Wyn is still remembered in Flanders, as he is in Wales, as a potent symbol of bloodshed and loss. Remarkably, the “Black Chair”, as it is now known, was carved by a war refugee from Flanders, Eugeen Vanfleteren.

There are striking comparisons between the story of Hedd Wyn and that of another young poet, Francis Ledwidge from Ireland. They both died on the same day, and both are buried at Artillery Wood cemetery. Those comparisons will be explored, along with other themes such as refugees and bilingualism, during youth workshops to be held in Ireland later this year.

Poetry of Loss, and the wider Cymru’n Cofio Wales Remembers 1914-1918 programme, is an opportunity for Wales to reinforce its cultural links with Europe and to promote Wales’ literary heritage to new audiences. The wider programme’s partnerships include links with Germany, France, Belgium, Ireland as well as the Turkish community to commemorate the Gallipoli Campaign.

Lleucu Siencyn, Chief Executive of Literature Wales, said: “As well as remembering the terrible loss of lives during the First World War, this is also an opportunity to reflect on the role of refugees in our society, and to consider how the Belgian refugees received such a warm and enthusiastic welcome in Wales and Ireland during the war.”

First Minister Carwyn Jones said: “The centenary of Passchendaele, which claimed the life of Hedd Wyn and so many other Welsh soldiers, is an important part of the Cymru’n Cofio Wales Remembers 1914-1918 Centenary Programme. The programme of events being arranged by Literature Wales is an opportunity to reflect on the enormous sacrifices our soldiers made, as well as highlighting the loss of some of our most talented and creative individuals. It is important that future generations understand the impact that this terrible war had on so many aspects of Welsh life.”

Poetry of Loss will include:

Details of the Writers’ Residency opportunity in Brussels were recently announced by Literature Wales. The residency is open to writers born in or currently living in Wales, writing or working in Welsh or English. The successful writer will be based at Passa Porta in the heart of Brussels from Monday 8 – Sunday 28 May 2017. The closing date for applications is Friday 10 March. Full details are available here.

For more information on Poetry of Loss, contact Literature Wales, on: post@literaturewales.org / 029 2047 2266.