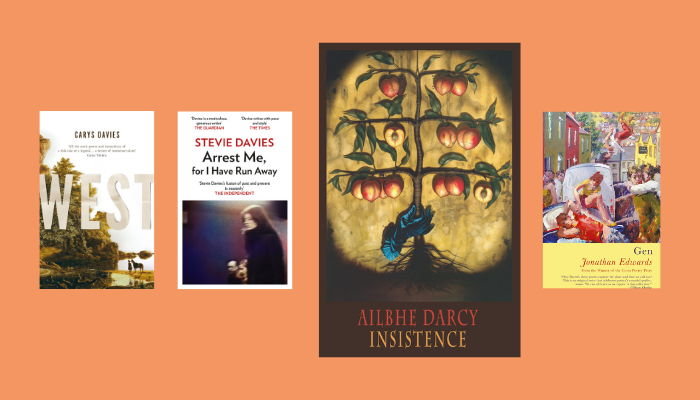 At Aberystwyth Arts Centre on 20 June, Literature Wales announced that Cardiff-based poet Ailbhe Darcy is the winner of the Wales Book of the Year Award 2019 for her striking collection, Insistence (Bloodaxe Books).

Ailbhe Darcy first took to the stage to collect the Roland Mathias Poetry Award, before returning to be crowned winner of the overall title Wales Book of the Year 2019 and receiving a total prize of £4,000 and a specially commissioned trophy, designed and created by the artist Angharad Pearce Jones. The prize was presented to Ailbhe by Professor Elizabeth Treasure, Vice-Chancellor of Aberystwyth University.

Insistence is a collection set during the six-year period the poet and her family spent living in a post-industrial city in Midwestern America, during which time Ailbhe Darcy gave birth to her son. The poems explore her feelings of bringing up a child in that particular environment of economic, racial and environmental separation, and at that particular time where climate change is a tangible reality. Insistence has also won the Pigott Poetry Prize 2019 and was shortlisted for the Irish Times Poetry Now Award 2019 and TS Eliot Prize 2018. Click here to read more about Ailbhe’s award-winning collection.

Speaking about Insistence, Judge Sandeep Parmar said: “Insistence, is a proliferation of uncertain and strange lyric events, invigorating poetry at the level of line and language. Her title responds to a work by the poet Inger Christensen that centres around existence. Replacing ‘existence’ with ‘insistence’, Darcy’s work opens up a natural world where love erupts with explosive force onto the necessity of living. The contours and iterations of this book and the depth of Darcy’s thoroughly human project is operatic, mortal, unforgettable.”

Celebrating books across three categories in both English and Welsh – poetry, fiction and creative non-fiction, the ceremony saw 10 winners take to the stage to claim a total prize fund of £12,000.

The winner of the Aberystwyth University English-language Fiction Award is West by Carys Davies (Granta), a novel following the journey of Cy Bellman, American settler, widowed father and amateur explorer, and his daughter Bess who eagerly waits for his return.

The winner of the English-language Creative Non-Fiction Award is Moneyland by Oliver Bullough (Profile Books), where the investigative journalist reveals the obscene dark side of globalised finance. The category winners each received a prize of £1,000.

The Awards are judged by an annually selected independent judging panel. This year’s panel are Sandeep Parmar, poet and Professor of English Literature at Liverpool University; Louise Holmwood Marshall, Head of the English and Creative Writing Department of Aberystwyth University; and novelist and Emeritus Professor of Creative Writing at Birkbeck College, University of London, Russell Celyn Jones.

The winning title of the overall Welsh-language Award as well as the Aberystwyth University Fiction Award and the Golwg360 Welsh-language People’s Choice Prize is Llyfr Glas Nebo by Manon Steffan Ros. The dystopian novel, published by Y Lolfa, won the Prose Medal at the Cardiff National Eisteddfod in 2018, and was shortlisted for the Tír na nÓg 2019 prize.

The Welsh-language Poetry Award winner is Cyrraedd a cherddi eraill (Cyhoeddiadau Barddas) by Alan Llwyd, a collection of biographical poems to mark the multi-award-winning poet’s 70th birthday. The winner of the Welsh-language Creative Non-fiction Award is Andrew Green with his Cymru mewn 100 Gwrthrych (Gwasg Gomer), a book which tells the story of Wales through 100 objects.

The winners were announced at an Awards Ceremony held at Aberystwyth Arts Centre on Thursday 20 June in the company of the competition’s judges, shortlisted writers and their guests, publishers, partners and members of the public.

Related to
award-ceremony, Literature Wales, Wales Book of the Year

Call-out for Expressions of Interest