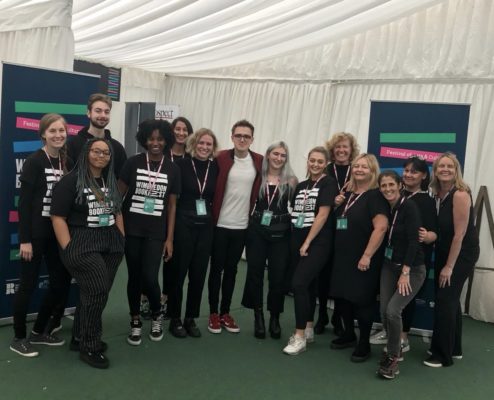 My second blog post seeks to reflect my volunteering experience at this year’s Wimbledon BookFest!

Explaining how I managed to volunteer for the festival should be the first thing I share with you, I believe. As an intern who is offered the opportunity of experiencing the cultural sector every day both in Wales and in the UK in general, I found myself emailing Wimbledon BookFest for volunteering and received a quick reply from Alice Skinner, the assistant producer responsible for the festival’s volunteers. As a book lover, I was thrilled to hear that Alice could squeeze me into a couple of events during Wimbledon BookFest even though the volunteer deadline was over. I was given my rota for public and education events after a couple of emails back and forth.

I started my volunteering experience with two school events on Friday 12 October and got the most out of them as I had the chance to observe the passion kids had for books and it definitely made my day. I liked it even more each time they asked whether they could get their signed copies and I still laugh whenever I think of the kids greeting Tom Fletcher with a cool “Heey Tooom!” manner.

The greetings Reggie Yates received from the focused and ready-to-discover teenagers was an amazing moment to witness as well because he gave them the talk on self-discovery, a talk you could only hear in movies. The funny thing was that he was actually talking about the movies he shot and the movies the teenagers could shoot with the technology they have in their pockets.

Saturday 13 October started for me with Patrick Gale and Christie Watson & Caroline Elton. Having been highly impressed by Watson’s and Elton’s session on the experiences of nurses and doctors, I started to think of reading more on the health sector, a sector which faces a lot of difficulties in today’s UK.

Finally, I completed my Wimbledon BookFest experience listening to Tara Westover & Sally Bayley on Sunday 14 October when they discussed the memoirs they wrote and shared their feelings on what actually led them to write.

Wimbledon BookFest, in general, was an amazing experience for me, a student who enjoys being around literature whether that literature is in solid forms as in the case of books or in the air mixed with kids’ laughter and excitement.

Drawing the Word: free workshops for disabled writers and artists