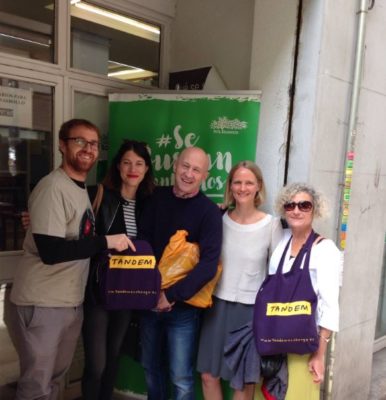 There has to be some irony in Literature Wales engaging in a European initiative when the UK is teetering on the brink of Brexit?

And yet I was asked to travel to Madrid to work on a Tandem Project and I embraced it as if Britain had only just entered the Common Market.

It was an eye opener, not because I lost my wallet on day two but because the wounds inflicted by General Franco are still very real for the older generation I met in Spain. It was something people wanted to talk about along with the wonderful food recipes they had prepared to give me a taste of their country. On the return trip all we can offer them is bangers and mash, pie and chips and, if they’re lucky, turkey twizzlers!

We (Literature Wales workers and I) were wonderfully well looked after by the staff from the Solidarios office in Madrid. They are an organisation that recruits and trains an army of volunteers who work with vulnerable people. They work with prisoners, the homeless, the elderly and many more groups.

It was difficult to draw comparisons with social care provision in Wales but what was apparent was that there were elderly people living in basic conditions getting very limited contact and often just through a volunteer’s visit each week. I met two blind ladies who could only go out when their volunteer came to see them. Is that level of care the same in Wales?

One story from the trip haunts me still. During Franco’s brutal dictatorship only the memories of the Nationalists who fought for him were celebrated and remembered. The history of the civil war was distorted and forty years of attempted brain washing tried to convince the Spanish people that the Nationalist heroes had saved old Catholic Spain from the hostile forces of atheism and communism. This was a very different story to the one that inspired me as a teenager in Orwell’s Homage to Catalonia.

After Franco’s end in 1975 there was a Pact of Forgetting to let bygones be bygones. But that wasn’t the end of it, in 2007 the tragedy was revisited with the Law of Historical Memory which condemned the Franco regime and sought to compensate the victims of the civil war.

The haunting story told to me by Alfonso was that in one part of Spain they began digging for a mass grave in a church yard and, as they did so, an old man sat watching their every move.

As the days passed they made the gruesome discovery of a mass of bodies. The old man’s eyes filled with tears and one of the digging party asked him if he was ok. He replied by asking for the buttons of a shirt they had revealed and they wondered why he wanted them.

The old man told them a story of a seven year old boy who had to get in a truck with his father and his uncle. When the truck stopped the father said to the boy;

‘Listen carefully. I don’t expect you to understand what is going to happen but do exactly as I tell you. In a minute the soldiers will take us all out of the lorry and make us line up. You must stand behind me and your uncle. We will be shot. When we fall make sure you fall with us and lay still in a foetal position. When it is dark and the soldiers have gone you must climb out of the pit and run to the Portuguese border where you will be safe.’

The old man told those digging that he was the seven year old boy in the story and the buttons were his memory of his father.

The scars of the civil war have not completely healed and it still casts a shadow over modern day Spain. All over Europe nationalism is on the rise again in various forms. It’s gaining in popularity from Matthew Salvini in Italy to Marie Le Pen in France and from Viktor Orban in Hungary to Britain’s Nigel Farage.

For that week I felt like a European and a citizen of a wonderfully diverse cultural world.

I sincerely hope Brexit will not signal the end of Welsh involvement in the Tandem Project or any other such initiatives that bring the people of Europe together, as populations ebb and flow and continually migrate.

When all is said and done the loss of a wallet was pretty small fry compared to the lessons I learnt in Spain.

Mike Church has written over fifty children’s picture books with Petra Publishing in Caerphilly. His most recent collection of poems for adults, ‘Bouncers and Takers’, was published in June 2018 by Red Poets/Glamorgan Press.