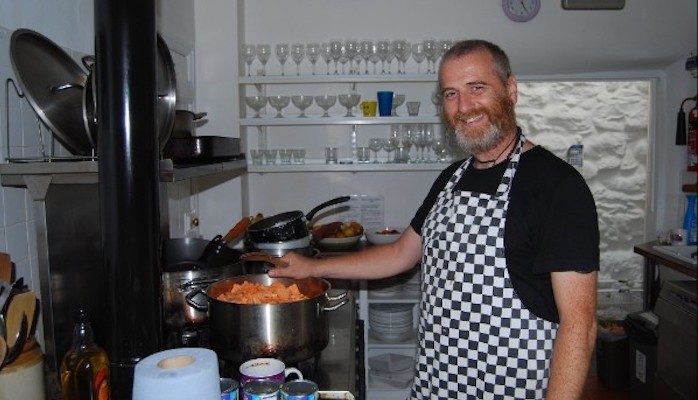 Each month, Tony Cannon, Tŷ Newydd’s resident chef shares a new recipe which is published in the monthly Tŷ Newydd newsletter. This month, to celebrate St David’s Day, Tony’s cooking a firm favourite – Lobscouse! If you decide to cook Tony’s Lobscouse, share a picture using the hashtag #TonysKitchen #CeginTony.
Not a week goes by where Tony doesn’t dish up his famous Lobscouse. Here in Wales, everyone has their favourite recipe, be it their Mam or their Mam-gu’s old recipe. Though we might be biased, we do think that Tony’s lobscouse is just as good, if not better.
Ingredients:
1kg of diced beef, lamb or Seitan (vegan option)
4 Large Potatoes
4 Large Carrots
3 Leeks
2 Large Onions
1 Swede
Method:
Fry off the meat until brown and cover in water. Bring to the boil and simmer for half an hour. Omit this stage if using Seitan. Prepare all vegetables into chunky pieces and cut the potatoes into quarters. Fry off the onions and leeks before adding to the meat. Add all other ingredients and cover in light stock. Bring to the boil and simmer until the meat is tender and the potatoes are breaking down. Add salt and pepper as desired (I use Halen Môn).To serve with:
Red cabbage, chunks of Caerphilly Cheese or vegan alternative and freshly baked bread with Welsh butter.

Notes:
Add more or less potatoes as desired. Scousers say you should be able to stand a spoon up in a pan of scouse. However lobscouse is traditionally wetter than this, similar to a broth.

If you require a vegetarian or a vegan gluten free version, simply replace Seitan with cooked Butter Beans.