Looking back – the genesis of the Roland Mathias Prize for poetry 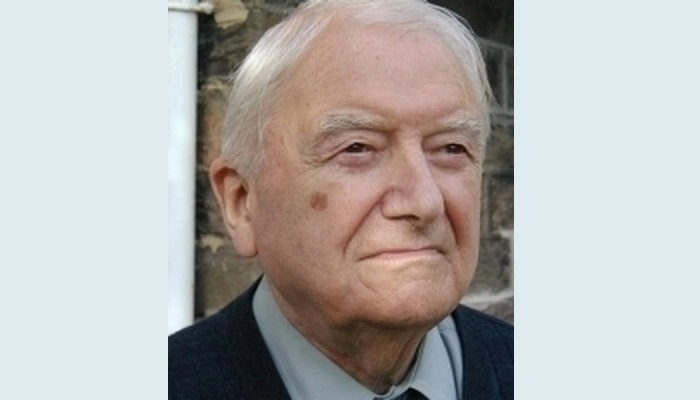 I recently had a visit from an American academic interested in the life and work of Leslie Norris. Norris was a Welsh poet and short-story writer who died in 2006 and was roughly a contemporary of my father, Roland Mathias. The visitor was keen to learn more about the link between the two poets because he had uncovered extensive correspondence in the National Library of Wales. In fact, my father was a hoarder of paperwork, and in the Library archive there are boxes full of letters from many of the literary figures of the day.

One of the reasons for this extensive correspondence was the fact that Roland Mathias, apart from his own writing, was also editor of the leading literary magazines of the time, Dock Leaves and then the Anglo-Welsh Review. These magazines provided a launching-pad for the poetry of many a writer who were later to make their names. Robert Minhinnick, now so prominent among Welsh poets writing in English, said recently that, as editor of the Anglo-Welsh Review, my father was a formative influence on his and many other poets’ work. “He would respond to young writers and give them advice on their work”, he told an audience in my father’s home town of Brecon.

So Aaron Eastley from Brigham Young University in Utah had made his way, via my father’s correspondence in Aberystwyth, to Brecon to find out more about Leslie Norris. Born in Merthyr, Norris lived most of his life outside Wales, and was sometimes criticised for only seeing Wales and the Welsh countryside through the eyes of his childhood. One poem, in particular, was difficult for the American outsider to decipher. A Small War became controversial because Norris included the lines: ‘I would not fight for Wales…..Nor would I fight for her language’. But he understood how farmers felt when their land was taken from them to build a reservoir:

‘It’s the small wars I understand. So now that forty

people lock their gates in Senni, keeping the water out

with frailest barriers of love and anger, I’d fight for them.’

So we travelled up to the Usk Reservoir, which was probably the reservoir he was thinking about. Built in 1955, the protests then had been mainly local. But Norris was writing this poem years later – after the drowning of Tryweryn.  Despite the obvious fact that the politics of water was now something very different from 1955, he insisted in the poem that the drowning of a Welsh valley was a purely local matter, of concern to ‘five miles of land, enough small farms to make a heaven’.  Wittingly or not, Norris appeared to be challenging the political dynamics which had emerged from Tryweryn.

Aaron Eastley and I walked and talked around the Usk reservoir, discussing the issues arising from the poem with the kites swooping above us. I felt I was walking, however tentatively, in my father’s footsteps.

During his long career, Roland Mathias made a considerable contribution to the development of Welsh writing in English. An editor and literary critic as well as a poet, short-story writer and historian, he could take a rounded view of Welsh literary culture. Let’s take (more or less) at random: volume 20 of the Anglo-Welsh Review in Spring 1972 boasts poems by Gilliam Clarke, Leslie Norris and Tony Curtis, with articles about Brenda Chamberlain, Alun Lewis and David Jones.

Before my father died in 2007 at the advanced age of 91, it was agreed to acknowledge all that had been achieved during his lifetime. Under the auspices of a local charity, the Brecknock Society and Museum Friends, the Roland Mathias Prize was established. Initially it was a stand-alone prize which went wider than poetry, but since 2012 has been the poetry prize within the Wales Book of the Year Award. And since 2012, there have been eight winners, all authors who my father would have been keen to publish alongside the names quoted above.

I shall focus on the four winners of my father’s prize who also went on to win the overall Wales Book of the Year. Rhian Edwards won in 2013 for her first collection entitled Clueless Dogs. Each year the winner of the Roland Mathias Prize has delivered a reading of their winning poetry in Brecon, and Rhian Edwards gave a virtuoso performance. She recited a range of her poems from memory and with extraordinary vivacity. The following year, we had to hire a larger hall for the Brecon reading. Owen Sheers had won the double with his verse drama, Pink Mist. It is the tale of three school-friends who enlisted in the army, ending up in Afghanistan. Told as much from their families’ point of view, it was a moving experience for many in the audience. And then in 2018 it was the turn of Robert Minhinnick for Diary of the Last Man, whose performance of his poems was accompanied by a film illustrating his central theme of a disappearing world: Perhaps/I am the last man/Perhaps I deserve to be.

And then, at a ceremony in Aberystwyth last week, the poet Ailbhe Darcy won not just the 2019 Roland Mathias Prize but also the overall Wales Book of the Year, the fourth time a poet has achieved that double success in the last eight years. The collection, Insistence, was described as a ‘proliferation of uncertain and strange events, invigorating poetry at the level of line and language’. It seems the Roland Mathias Prize has achieved a greater prominence for poetry in recent years and helped to raise its status in the literary consciousness of Wales.

On Friday 1 November, the Brecknock Society will host an evening with the 2019 Roland Mathias Prize and Wales Book of the Year winner, Ailbhe Darcy at The Muse, Brecon. Click here for further information.