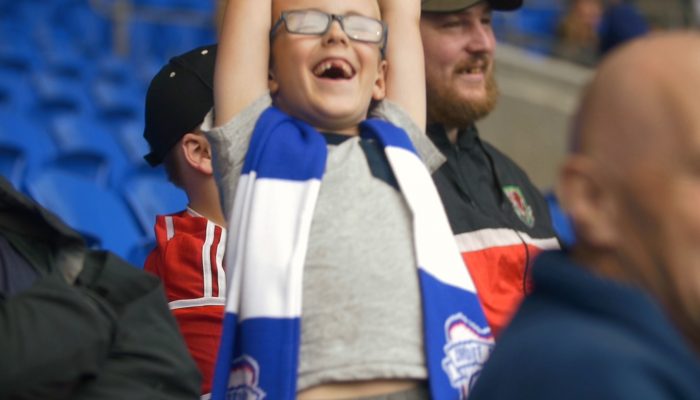 Wherever you may be in the world, it’s more than likely there’s a group of children nearby attempting to score a goal like Ronaldo, or serve like Serena Williams, thanks to the wide appeal and reach of sports.

With the Fifa World Cup 2018 and Wimbledon finals landing on the same weekend this year, no-one can escape the world of sports this summer, and this is especially true here at Literature Wales.

We believe that collaborating with partners in the sports sector is incredibly valuable as it gives us an opportunity to connect with hard-to-reach individuals and communities, and that literature is accessible and belongs to everyone. For many years we have organised and supported many successful projects in the world of sports. These are innovative activities which extend the traditional definition of literature. Here is a brief synopsis of some of these projects:

Get Creative with Football

Literature Wales teamed up with Cardiff City Community Foundation for this project inspired by Roald Dahl’s memories of visiting Cardiff City Football club as a young boy, experiencing the magic of a match for the first time. Get Creative with Football was part of the Roald Dahl 100 Wales celebrations in 2016 and used football to spark an enjoyment of literature and creative writing in dads and lads from south Wales. Read more about this project here.

“My son and I had a fantastic 3 days with the Literature Wales CCFC project. The project was well
organised, well-pitched for the children and very inspirational for me and my son. Thank you.”

Feedback from one of the participants

Here is a film of the project created by Carter Films in partnership with Ffilm Cymru – Inspiration, My First Match. It was played to an audience of over 13,000 people during the half time break of a Cardiff v Leeds United match.

Wales has hosted its fair share of prestigious sporting events over the last few years; from the Ryder Cup to the Volvo Ocean Race, but without a doubt, the biggest audience draw was the UEFA Women’s Champions League Final on 1 June, 2017.

To celebrate this memorable event for Cardiff and for Wales, we worked alongside the Cardiff City Community Foundation to give girls from two Cardiff-based primary schools the opportunity to take part in football training and creative writing workshops. Read more about this project here.

“When I grow up I want to play
professionally because football is my passion,
football is my dream – mae merched yn gallu
gwneud pethau mae bechgyn yn gallu.”

The outcome of the project was a short film celebrating women’s contribution to sports.

Ospreys in the Community

This year we have worked with the Ospreys Foundation on two project with children and their parents, offering creative writing and storytelling workshops alongside rugby training sessions with some of Wales’ rugby stars. The project took place over the course of 5 weeks with two groups – one creating a film and another working towards creating an anthology. The projects aim to promote exercise and literature as two elements contributing to a balanced, engaged and healthy life.

In 1918 the first multi-ethnic cricket team in Wales (and possibly the UK) played a summer season of cricket for the first time. 100 years later we are celebrating the team, which was established in Butetown, Cardiff by Frederick de Courcy Hamilton, by working with Glamorgan Cricket Club on a project with 60 year 4 pupils from Mount Stuart School.

The children will have the opportunity to take part in a variety of creative writing sessions inspired by history – from writing magazine articles to creating scripts of imagined interviews, and learning about the heritage of their local area in the process, in addition to having memorable experiences with Glamorgan Cricket Club, such as forming a convoy as the players come to the field at the start of a match.

We have organised or collaborated on a number of other sports projects over the years, including All Skilled Up, Calon rugby tours with Owen Sheers, and talks on dyslexia by Scott Quinnell, to name just a few. Other activities connected to the sporting world include writing and dance, athletics, Geocaching, yoga and even horse-riding.

Our work with the sports sector will continue in the future, giving many more people across the country further opportunities to engage with literature in a creative and exciting manner.

We hope that more iconic highlights from the sporting world will visit Wales in the near future, giving us an opportunity to introduce the joys and the benefits of words to a new audience. Our colleague Steffan is keen to see the Tour de France Peloton weaving it’s way through Snowdonia and the Pembrokeshire coastlines. Only time will tell!