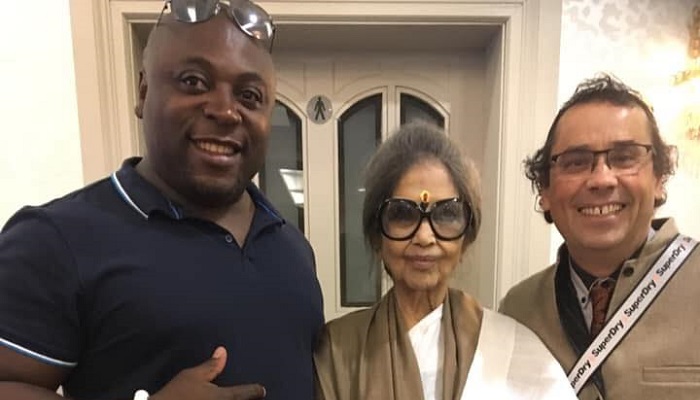 In June 2019, Literature Wales Director, Eric Ngalle Charles attended and took part in the Jaipur Literature Festival in Belfast. In the following piece he recounts his time there.

It was an honour; it was a great privilege to have represented Wales in the Jaipur Literature Festival which took place, for the first time in its history, in Belfast. I was there not only in my ambassadorial role as a director for Literature Wales, but also in my capacity as a writer, poet and playwright.

Described as the “greatest literary show on Earth” by Tina Brown, the JLF was for me my first opportunity to visit Northern Ireland. Not only that, it took me to the city where the poet laureate, sage Seamus Heaney lived; from the Lyric theatre to the Harbour hotel all the way to  Bellaghy, this for me was a journey, an awe-inspiring experience. The word was celebrated in all its forms – something which does not happen to a village boy like me from the foothills of Mount Fako, Southern Cameroon.

The company behind the Jaipur Literature Festival ensured it was a success thanks to their smooth operation. There was tremendous support from the British Council Northern Ireland and the Arts Council. Roisin McDonough was indefatigable as was Damian who ensured that all who attended the various events in Belfast had a truly amazing experience. We discussed various themes including the post-conflict literature, cultural and political impact.

Not only was I representing Wales, I had the chance to respond to the work of Seamus Heaney, after which his brother congratulated me for a job well done.

The grand daughter of Mahatma Gandhi was there, and when she spoke she had the audience spellbound.

My hope, my wish would be for the JLF festival to be brought to Caernarfon.