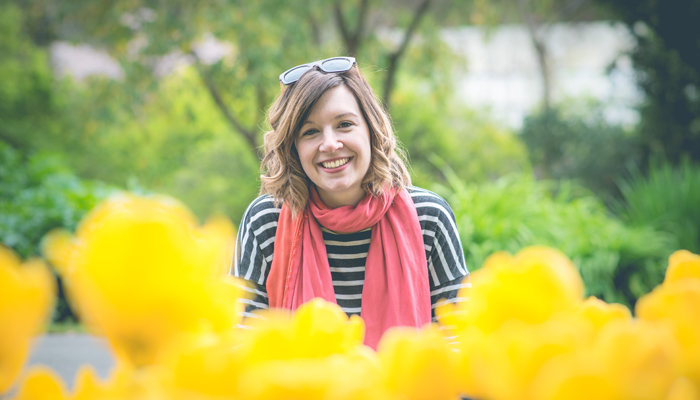 © Sioned Birchall
It was announced today at the Bridgend Taff-Ely Urdd Eisteddfod that Casia Wiliam will take on the role of Bardd Plant Cymru for 2017-2019.

The news was announced from the Festival’s main stage by Alun Davies, AM, Minister for Lifelong Learning and Welsh Language. Casia will be the 15th Bardd Plant and will be officially starting her role in September when she will take over from Anni Llŷn who took on the role in 2015.

The Bardd Plant Cymru project ensures that every child in Wales has the opportunity to experiment with Welsh literature, whatever their ability or background. Through workshops, performances and activities, the project introduces literature to children in an energetic, dynamic and exciting way.

Casia is 29 years old and is originally from Nefyn in the Llŷn Peninsula, but now lives in Cardiff. She has published two books for children, has adapted two Michael Morpurgo books into Welsh and is a member of the Talwrn y Beirdd bardic team, Y Ffoaduriaid.

“I’m looking forward immensely to wander through Wales and meet the children, whether they love to write or are reluctant writers!” Casia said. “It will be a great pleasure to hear their ideas, to spark their imagination, and to encourage everyone to try their hand at writing poetry.”

“During my period as Bardd Plant Cymru I hope to show children that everyone can write a poem, that poetry is something that lives in our ears and not only on paper, and that writing and reading poetry is a wonderful tool to see and experience life through someone or something else’s eyes.”

With Anni’s period as Bardd Plant Cymru coming to an end, she’s confident that the scheme is being handed over to a capable successor. She said of Casia:

“She’s a brilliant author and poet. She has a fantastic imagination and I’m sure she’ll take the children of Wales on an adventure.”

Over the past two years Anni has taken the scheme to new hights by visiting every county in Wales, 83 schools, 10 castles and working with 20 external partners in workshops and various activities. During her time as Bardd Plant Cymru she has entertained, inspired and engaged with over 6,000 children. Activities have included: workshops; the Siarter Iaith tour; CBeebies show; performances during Cardiff Children Literature Festival; Roald Dahl 100 Wales celebrations; creating and performing a show for Gŵyl Hanes Cymru i Blant (Welsh History Festival for Children); The Senedd birthday celebrations; and the Urdd Message of Goodwill project to name but a few.

“We are overjoyed that Casia is starting in her role, and we would like to thank Anni for all her work and her enthusiasm over the past two years. Every Bardd Plant Cymru has claimed and developed the scheme and we look forward to seeing in what direction it will be taken by Casia. She is a very talented writer, and as partners in the scheme, we look forward with great enthusiasm to see Bardd Plant Cymru breaking new and exciting ground. Get in touch now to request a workshop!”

Anni and Casia will deliver workshops and events together over the summer, including a live poetry competition at Tafwyl 2017 on 1 July, before Casia officially starts in the role in September.

Literature Wales, who deliver the scheme, encourages any school, company, library or youth club who would like to request a visit from Bardd Plant Cymru to get in touch soon: barddplant@literaturewales.org / 029 2047 2266 – the closing date for visits during the 2017/2018 academic year is 1 December 2017.