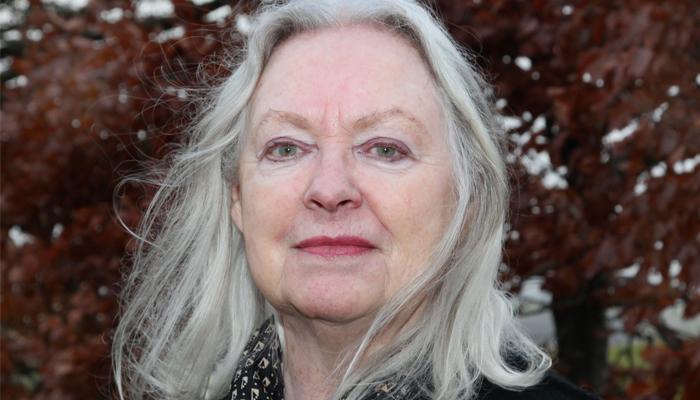 Former National Poet of Wales, Gillian Clarke has inspired thousands of people all over the world with powerful performances of her own work. She regularly collaborates with other writers in both Welsh and English and has been commissioned to create inscriptions for several major architectural projects, as well as poems to mark national anniversaries and honour significant individuals and organisations.

Born in Cardiff, she has made Talgarreg in south Ceredigion, her “milltir sgwâr” for several years, and is as comfortable reading her work in a back room of a pub as she is in front of thousands of school children as part of the Poetry Live! programme, or on stage at the many international festivals she is invited to perform at. She has a special rapport with young people, and her work has been on the GCSE and A Level examination syllabus for the past thirty years.

Gillian brings the Welsh language to the wider global consciousness, often publishing simultaneously in both languages, including Welsh words, tone and inflections in her English language poetry, and discussing Welsh and its influence on her. She was awarded the Queen’s Gold medal for Poetry in 2010 and the Wilfred Owen Award in 2012.

As well as poetry, she has written for radio, translated poetry and prose from Welsh, and broadcast across national radio and television channels. As President of the Welsh Academy and co-founder and President of Tŷ Newydd Writing Centre, her contribution to English language writing from Wales is unsurpassed.

Taliesin
(for Gillian Clarke on her 80th Birthday)

I have been the oak, shoulders wind-provoked
and clouds at sunset blowing their own-going;
I have been the fox corpse in a cloak of flies,
an expletive of relief in the farmer’s eyes.

I have been the butterfly tacked to the house-end,
its beauty rusting under nail heads;
I have been a pinch of unexpected description
and a razor’s kiss upon white skin.

I have been rare sun on the devotee’s nape
before ranting to the young for his own sake;
I have been the treat of fat floating on cawl –
Who stands against us? Who knows our soul?