Cymraeg Contact
HomeBlog"as she read, the piece became a poem" - Rachel Noelle on her internship with Literature Wales

“as she read, the piece became a poem” – Rachel Noelle on her internship with Literature Wales 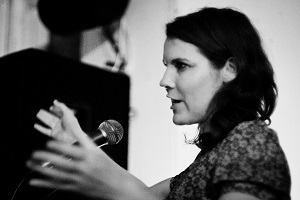 Rachel Noelle is a writer from Chicago. In June 2016 she joined the Literature Wales team as an intern, working on the South Wales Literature Development Initiative. If you would like to find out more about volunteering opportunities with Literature Wales please email post@literaturewales.org

‘It was good. I just didn’t understand it at all. It was too artsy.’

A fellow volunteer tells me her thoughts on a previous performing-arts event that we assisted with. Another volunteer overhears us and adds, ‘Welcome to the feeling of being at an arts festival.’

Before interning at Literature Wales in Cardiff, I thought working in the arts meant encountering shows or exhibits that were so “artsy,” they didn’t make sense. I’ve volunteered for shows where poets read their different poems out loud at the same time and in languages that no-one in the audience understood. I’ve seen a Shakespeare play performed with a girl in a black morphsuit somersaulting around the stage to the sound of a little girl singing a lullaby. They have all been interesting experiences but they’re often followed by the frustration of seeing something so highly esteemed and yet, just not getting it. But I assumed this was normal when working in the arts. The literature and art that I studied at university was bewildering and left me with questions.

At Literature Wales, I assisted the officer of the South Wales Literature Development Initiative (SWLDI). The scheme planted creative activities in underprivileged communities for people who would not otherwise have access to mainstream art. I took part in poetry workshops with patients who had chronic pain, creative sessions with young adults who had struggled with Mental Health and Homelessness, and storytelling activities with pupils who had been placed in a referral unit because of disruptive behaviour. During the sessions, the participants were challenged to use their imaginations and tap into their unexpressed thoughts. The exercises had therapeutic effects. One chronic pain patient stated how he was having a bad week but the workshop improved his mood. A school teacher at the referral unit marvelled at how the creative activities captivated the students and kept them engaged. For me, just witnessing these responses made me even more invested in the work that SWLDI was doing.

As part of my internship, I learned about the Welsh Government scheme, ‘Fusion: Tackling Poverty through Culture,’ which aims to make culture, heritage, and the arts accessible to everyone by tackling social exclusion and ultimately bringing communities together. All the art organisations that I’ve worked with aim to do this, but Literature Wales proves to be more actively working towards that goal. As the intern, I was part of a mission to share the value of creative writing with others and provide an outlet of expression for voices that rarely get heard in the “high-cultured” arts realm. My motivation to work hard every day was intrinsic. I became passionate about getting kids interested in creative writing. I watched young pupils from SWLDI’s cross-country Young People’s Writing Squads perform their poetry at an exhibit in the National Museum Cardiff. For me, the chance to showcase my creative writing in public didn’t arise until I was at university. I grew up in a suburb where funds were funnelled into my high school’s sports programmes while creative activities, like the arts magazine, were cut. Now, I feel driven to help redesign priorities in educational environments as well as communities where poetry readings or book clubs seem “too artsy” for lower-class members.

For the chronic pain workshops, poet Rhian Edwards asked the participants to reflect on their school days growing up and write about people they knew. The exercise opened up a discussion of how school has changed over the years.

‘Teachers can’t even wipe the children’s noses in schools now,’ one participant said.

‘You can’t put your arm around them if they are upset,’ another said.

The topic moved to sex education and we were soon laughing over stories of condoms on bananas and awkward teachers. Throughout the chatter, Rhian typed out bits and pieces of the conversation, stringing them together as we spoke. Towards the end, she read what she had compiled. We were all amazed. She used only words that were spoken in the conversation, chronologically, with no added language. But, as she read, the piece became a poem. A remark about when people made emergency phone calls in telephone booths was made profound when placed after a comment on cyberbullying. The memory of ‘logarithms, sines, and cosines’ became rhythmic with words like ‘simultaneous equations.’ The entire poem hummed with nostalgia, reflecting endearingly on stressful moments in school. Details jutted out like a fragmented memory. The lines about how school is now were less specific, more ominous in the realm of the unknown.

It was incredible to hear this as a student who studied D.H. Lawrence and Francis Ponge. Here was a poem that appeared light and jokey, but actually had a deeper meaning. It was artsy and yet, I understood it and could relate to it. Even I remembered the phasing-out of phone booths and my first, after-school mobile phone. The workshop proved that trivial things, like calculators in Year 2 or the memory of 20-second mental maths tests, could be used in art. Something could be “artsy” yet just as familiar as your childhood home. This was the moral that fuelled Literature Wales: ‘Literature belongs to everyone and can be found everywhere.’ I became a total convert.

Having a passion for what I did transformed my internship into a much more enriching experience. I’ve often been criticised for rejoicing in getting unpaid work placements or pursuing careers that don’t benefit people in the direct, quantifiable way that medicine or banking does. But being intrinsically motivated has massively improved my work ethic. By working in a team that aims to inspire, I personally have been inspired.